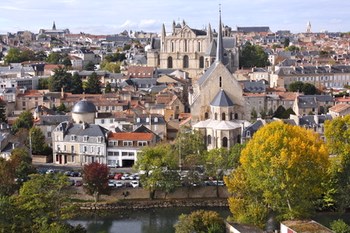 Poitiers is located in western France, and is the main both region Poitou-Charentes and the Ministry Vienne.Poitiers has about 90,000 inhabitants, while the metropolitan area has a population of approx. 250,000 (2009).

The city lies on the River Clain – 155 km southeast of Nantes.Poitiers is primarily an administrative, – communication and trade. The city also has its own university, which was founded in 1432.

A major tourist attraction in Poitiers is the historical center, surrounded by the remains of the medieval city walls. This is also the Gothic St. Peter’s Cathedral from 1379, the church “Notre-Dame la Grande de Poitiers” from the 1100s – with its striking façade and basilica “St. Hilaire le Grand” from the 1000s.

Other attractions in the city include Palace of Justice “Le Palais de Justice de Poitiers” from the 1100s, water tower from 1887, and the art museum “Musée Sainte-Croix” with exhibitions of paintings and sculptures.

10 km north of town is the popular theme park “Futuroscope”, where attractions include the observation tower, planetarium, IMAX theater and much, much more. Many of the attractions are based on advanced technology and multimedia. Futuroscope had 1.8 million visitors in 2010.

Airport Poitiers-Biard Airport is 3 km outside the city.