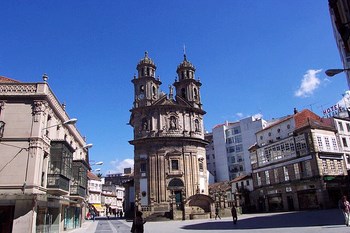 Pontevedra (also written Ponte Vedra) is the capital of the northwestern Spanish province of Pontevedra in Galicia, and is a city with about 80,000 inhabitants (2011). Distance south to the Portuguese border is only a few kilometers.

Pontevedra history goes back to Roman times, the city grew in earnest until one of Galicia’s most important trading centers in the course of the 1100s – and had its heyday in the late Middle Ages – before a dramatic downturn began.The city first woke to life again when the railway arrived in the late 1800’s – and the first part of the 1900s recaptured Pontevedra Galicia’s position as main cultural and economic center. A new recession continued into the Franco period, primarily because there was a significant Faranco-opposition both in Pontevedra and the rest of Galicia. After the Franco period, however, the city flourished again.

Pontevedra has several historic attractions to offer – including the old Roman bridge “Ponte de Burgo,” which has given its name to the city (Ponte Vetera, “the old bridge”). It crosses the river Lerez, which runs through the city.

The old center of Pontevedra is concentrated around the main square “Plaza Ferreria”. Here you will also find a special fountain and Convent “San Francisco”. The fountain has been an important stopover in the past for pilgrims passing through. Also the exceptionally beautiful Renaissance Basilica “Santa Maria” must be mentioned. The facade is decorated with forsirede silver plates.

Art lovers should take time to visit the Provincial Museum. It includes five buildings and a valuable collection of Celtic gold worker, a collection of paintings and an amber collection.