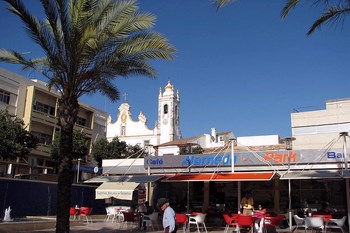 Portimao is located in southern Portugal the Atlantic Ocean.The town has 45,000 inhabitants (2011), and is one of the most popular tourist destinations in Algarve coast.Besides, the city is an important center for Portuguese fishing industry.

Portimao is known for its long sandy beaches, occasionally broken up by some pretty special rock and cave formations. The caves can be reached by boat, and are popular destinations.

In recent years, Portimao had a rapidly growing popularity as a holiday destination, especially for wealthy northern Europeans. The city stands out as a modern rekreasjonsby with a cosmopolitan feel, and many would characterize the location and nature paradise.

There are many activities at Portimao. Among the most common offerings are dolphin watching and boat trips – especially to the caves by the sea, but also along the Arade River, which has its outlet at Portimao. Another activity that is typical of Portimao, is golf. There are several golf courses in the immediate vicinity.

Otherwise Portimao a typical shopping town, where there are a lot of shops particularly in the area of shoes, handbags and cosmetics. If you want to experience the south-Portuguese nightlife, the atmosphere in Praia da Rocha recommended. There rampant nightlife, it also has its own casino. Praia da Rocha is located on the outskirts of Portimao – 2.8 km south of the city center.