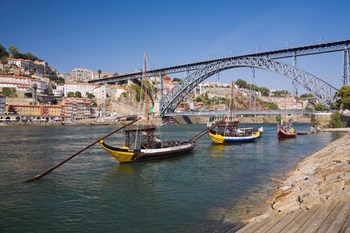 Porto (aka Oporto) is located northwest of Portugal’s Atlantic coast, about 5 km from the mouth of the river Douro. The city has approx. 270,000 inhabitants (2010), however, one takes the suburbs with a population increase to about 1.25 million.

Porto is Portugal’s second largest city (after the capital Lisbon ), and is also the most important center of commerce and industry in the northern part of the country.In Roman times the city was known as Portus Cale (as the name Portugal are derived), and a period of 1000-/1100-tallet it had a capital function.

The town is most famous for its port wine – which has been produced and exported here since the 1600s.

Porto has a beautiful location and is built out of a kind of terrace level upwards in a sloping terrain. Among the architectural attractions are the cathedral from the 1100s (which later rebuilt) a dominant structure. It is located near a large episcopal palace from the 1700s. Other special church’s São Martinho de Cedofeita from the 1100s and the Basilica Sao Francisco from the 1400s.

At the southern bank of the Douro, the suburb Vila Nova de Gaia, which is primarily known as “wine traders city”. Here’s the huge wine cellars that are blasted into the rock.

The nearest airport is Porto Airport, located 11 km northwest of the city.