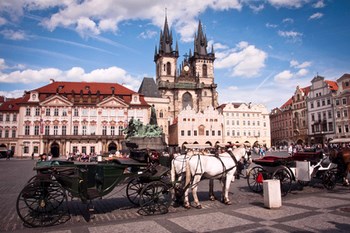 Prague is situated northwest of the Czech Republic, and is the country’s capital.The city is located in the former Austrian province of Bohemia, and has about 1.2 million inhabitants (2012). The river Vltava (Moldau) divides the city in two.

Prague is the Czech Republic’s administrative and cultural center – and the city is the seat of Parliament, the government, the president and the National Bank. Ever since the Middle Ages Prague has been an important trade and communications center, and has historically also been one of Europe’s most important cultural centers. Prague currently has many theaters, opera houses, concert halls and museums.

Prague has some of Europe’s best preserved buildings and city from the Middle Ages and the 1600s, and is considered to be one of the world’s most beautiful cities.

Old Town – “Stare Mesto” – is a UNESCO World Heritage Site, and there are a number of historic tourist attractions.Some of the most famous is the Gothic Town Hall and Tyn Church – both from the 1300s, and the bell tower from the middle ages – with its famous astronomical clock.

Other popular tourist attractions include Charles Bridge – one of the oldest stone bridges from the 1300s, the National Museum – with its natural and cultural history collections, the National Theatre, the Museum of Applied Arts – with its famous glass collection as well as the modern district Nove Mesto – with Wenzelplassen (“Vaclavske namesti”) – which is a broad avenue, and Prague’s main areas.

Royal Castle in the Hradcany district from the 1300s is also one of the most visited sights in Prague. This is also the St. George Monastery 925 years and the Gothic St. Vitus Cathedral from the 1300s.

Also, the Jewish quarter of Josefov district also recommended a visit. The district has six surviving synagogues, and the oldest are from the 1200s. There is also a Jewish cemetery and several museums.

It is also great shopping in Prague, and the city is known for its diverse nightlife – with pubs, bars and nightclubs.