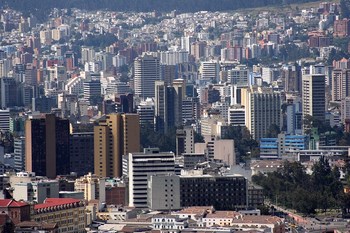 Quito is the capital of Ecuador, and is 2,800 meters above sea level, in the northern part of the country. The city belongs Pichincha province, located 25 km south of the equator. Quito was founded in 1534 and currently has 2.2 million inhabitants (2012). The city is an important political and cultural center.

Quito is surrounded by high mountains and situated at the foot of the active volcano Pichincha, which towers 4759 meters above sea level.  The city has a temperate climate with constant temperatures throughout the year. Because of the altitude, the climate is mild, but nights can be chilly here.

The city’s well-preserved historic center in the classic Spanish style is a UNESCO World Heritage Site.

Here are some of the city’s most popular attractions – including Quito Cathedral from 1562, the Church of San Francisco from 1535, the Jesuit Church “La Compania” (built in the period from 1605 to 1765), and Basilica “Basilica del Vote National” (begun in 1892) – which has the highest bell tower at 115 meters. The old town also hosts several monasteries and other buildings from the colonial era.

Other tourist attractions in Quito include a botanical garden, an archaeological museum, an astronomical observatory, a zoo and a number of parks and green spaces.

It is also very popular for tourists to take the cable car “Teleferico” – the world’s highest cable car – up to a lookout point on the volcano Pichincha east side. View site is located approximately 4100 meters above sea level in the valley below is a theme park.

The airport opened in February 2013 and replaced the old Mariscal Sucre International Airport – which was located just 12 miles north of downtown.