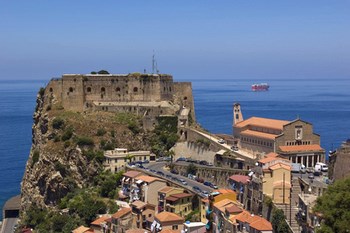 Reggio di Calabria is a coastal city located in the region of Calabria in southern Italy the Mediterranean.The city has about 186,500 inhabitants (2011), and is located at the southern tip of the Italian peninsula by the Strait of Messina. On the other side of the strait is the island of Sicily.

The landscape in and around the city is fertile and cultivated in the example olives, wine, citrus fruits and vegetables.

From the port of Reggio di Calabria is a ferry connection to the Sicilian city of Messina and the island of Malta.The trip across the Strait of Messina to Sicily takes 20 min.

Reggio di Calabria is famous for being the hometown of the famous fashion designer Gianni Versace and his family worked as tailors here.

The city has a number of popular tourist attractions – including several archaeological museums are mostly dedicated to ancient Greece.In the museum “Museo Nazionale della Magna Grecia” one can see exhibits of famous Greek bronze statues from the period 460-430 BC Kr.

Other attractions in the city include fortress “Aragonese” from the 1400s – an important historical and cultural landmark, Reggio Calabria Cathedral from 1928 – the region’s largest church and the remains of the Greek city walls from year 300 BC Kr.