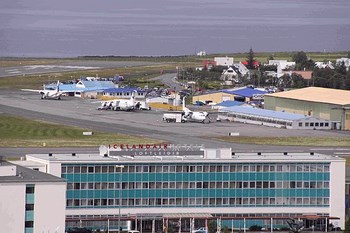 Reykjavík Airport (RVK) – which has the long name Reykjavíkurflugvöllur in Icelandic – the main airport for the domestic grid, as well as traffic to Greenland and the Faroe goes here. The airport has three runways and since it is located very near the city center, the expansion possibilities small. Therefore, there are plans in a relatively short time to move it.

From Reykjavik Airport, the airlines Air Iceland and Eagle Air regular flights to all the other airports on the Iceland.Air Iceland has – with Atlantic Airways – also routes to Greenland and the Faroe Islands.

There are no hotels at the airport, but it’s a short distance to the center of Reykjavik, where the offer is good. Moreover, there are frequent buses to the city center, and you could also take a taxi.

If you want to rent a car in Iceland, several of the major international car hire offices at Reykjavik Airport – including Avis, Budget, Europcar, National, Sixt and Thrifty.

At the airport, a restaurant and several small cafes and a shop that sells Icelandic souvenirs.