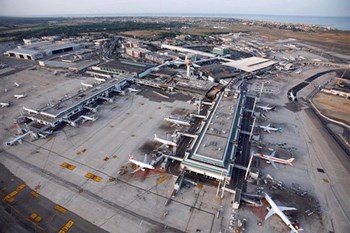 Rome Airport was opened in 1961 and currently has five terminals: A, AA, B, C and 5 The airport serves approximately 36.3 million passengers annually (2010).

Around 100 airlines fly from Rome Airport to numerous destinations worldwide. Some of the most popular routes, goes to Madrid, Paris, London, Amsterdam, Barcelona and Milan .

If you want accommodation near the airport, Hilton Airport Hotel here.

There are good public transport from the airport into the center of Rome, and you can then use the train, bus or taxi. In addition, a number of car hire offices at the airport, if you want to rent a car in Rome. The known international players like Avis, Europcar, Hertz and Sixt are also represented.