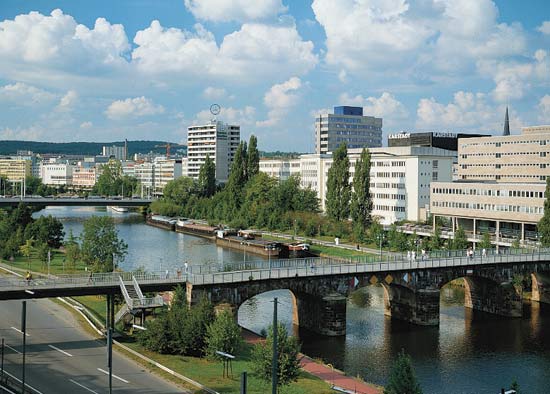 Saarbrücken is a city in the state of Saarland in southwestern Germany not far from France.The city is located in a densely populated area and has a population of 176,135 inhabitants (2011).

Saarbrücken used to be the industrial hub, particularly because of the coal mines in the area. The city and was known for the production of iron and steel, sugar, beer, pottery, optical instruments, machinery, and building materials. But the city has lost importance as an industrial center in the past decades in connection with the coal mines lost its profitability.

Historic landmarks include Saarbrücken stone bridge over the Saar (1546), the Gothic Church of St. Arnual, Saarbrücker Schloss (castle from the 1700s) and old town with called St. Johanner Markt.

Old Town is known to have a number of good restaurants, cozy cafes and boutique shops. A heavy one needs to get the beautiful Baroque Ludwigskirche. Europa Galerie is a shopping center that differs from most because it is located in a beautiful, dignified historic building.

In two periods in the 1900s (1919-1935 and 1945-1957) were Saarbrücken part of the Saar territory under French administration. Because of this and close to France has retained some French influences.

Saarbrücken Airport is 11 km from the center of Saarbrücken.