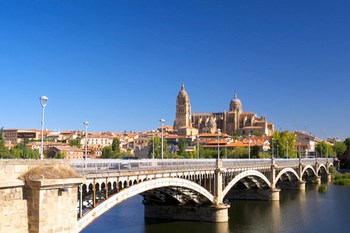 Salamanca is the capital of the province of the same name, located 180 km northwest of the Spanish capital Madrid.The population is about 160,000 (2011), and the city has an important significance as a railway junction. Otherwise, tourism is the main industry, and Salamanca receives over one million visitors annually.

The city was founded by the Celts for about 2,400 years ago, and have historically been ruled by various empires. During the Spanish Civil War of the 1930s put General Franco’s government in the city.

Spain’s oldest university is located in Salamanca. It was established back in 1218. The city center is marked by a number of monumental buildings, all of which are popular tourist attractions. Oldest is the Roman bridge from the first century ADKr.

Other historic buildings is the old cathedral from the 1100s, the new cathedral from the 1500s and “Scallops house” from 1512. Also, several medieval monasteries have mentioned – including “San Esteban” and Ursulinerinneklosteret. Several of these buildings are centered around the main square “Plaza Mayor” which was built in the early 1200’s. The old town is full of UNESCO World Heritage Site, and in 2002, Salamanca status as European City of Culture.

An attraction of a rather special nature is a frog sitting on a skull and crossbones at the entrance to the university. It delivered the tradition says that it brings good luck to spot among all the other small shapes jewelry facade.

The nearest airport is Salamanca Airport, located about 19 miles east of downtown.