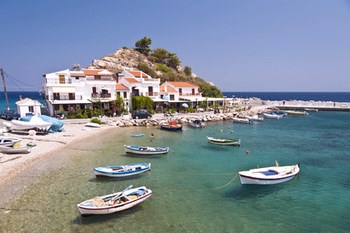 The island’s landscape is dominated by the two mountains Ampelos and Kerkis. The latter is the island’s tallest, measuring 1434 m The coastline of Samos is varied beaches (especially in the north and southwest) steep cliffs and coves.

The great mathematician and philosopher Pythagoras was born on the island of Samos in the year 580 BC Kr., And lived his entire life here.

Samos has great charter traffic in summer, where the sun, swimming and beach are the focus. The island also has many monasteries and ruins of medieval castles and ruins of Heraion Temple from 570 BC Kr. is a UNESCO World Heritage Site. Also the old port city Pythagorion listed on the UNESCO list. Here you can see the ruins of Greek theater, Roman baths and the remains of fortifications.

Capital “Samos Town” is located on the northeast coast of the island and has about 6300 inhabitants. It is the island’s administrative center and largest seaport. From here you can take the ferry to such Piraeus and Turkey.

In addition to the capital city is Samos Kokkari, Pythagorion and Votsalakia the most popular tourist destinations on the island.

Samos International Airport is located 9 km southwest of the capital.