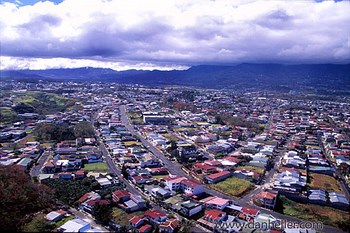 San José is the capital of Costa Rica, located in the province of the same name.The city has 288,000 inhabitants, while the metropolitan area has a population of 2.3 million (2011).

San José is located in the central highlands 1,150 meters above sea level The landscape consists of fertile hills and plains. North of town, several active volcanoes, and south of the city dominates the Cordillera de Talamanca.

San José has several universities, and the oldest was founded in 1845. The capital city is also a transportation hub, with an international airport, rail and highways to other parts of the country.

Top industries for the city’s tourism, coffee trade and industry.

San José has a number of tourist attractions – including the “Catedral Metropolitana” – the cathedral from 1871, the National Theatre in 1897 and the National Museum – with exhibits that tell about the country’s history.

The city also has a coin museum, a gold museum and a children’s museum.

Approximately 1 hour drive from San José is the Poas Volcano, which is a popular attraction for tourists.