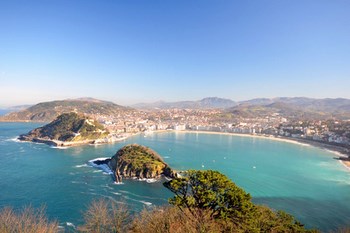 San Sebastián is the capital of the northern Spanish province of Guipúzcoa. The distance to the border France is approx. 17 km.The number of inhabitants is around 185,000 (2011). San Sebastian has for years been known as a fashionable seaside resort, and in earlier times had the Spanish court of his summer residence here. San Sebastian has an important function both as a port and industrial city, but the most important industry is still tourism.

Another way to present San Sebastian is to call it one of the Basque Country’s premier tourist destination. Basque Country is the name of a historic indigenous area at the head of the Bay of Biscay, which includes both a Spanish and a French part. Basque culture influence thus greatly both history and people of San Sebastian, which is particularly evident in the annual “Semana Grande” festival. Then there will be bullfights, parades, concerts, amusement and competitions within the distinctive Basque rowing sport.

An important reason for San Sebastián popularity as a tourist destination, they are two sandy beaches – one on each side of the center. “La Concha” is the longest of them, and is considered one of the world’s finest. The other beach is especially popular with surfers.

What else characterizes San Sebastian, architecture is Victorian style – both in the center and along the beautiful beach promenades. In the port area, where the former dotted with fish stalls, there are currently exclusive fishing and seafood restaurants.