Compare prices and find cheap car hire on Santorini from well-known and local car hire companies. Insurances and unlimited mileage are included. Save up to 70% on car rental in Santorini through us.

In Greek, Thira is the official name of Santorini, and in classical Greek the island of Thera. However, the name Santorini was used when the Latin Empire ruled in this area, and is currently used mostly in an international context.

Santorini itself is shaped like a crescent moon, and occurred as a result of one of the largest volcanic eruptions in history. This is believed to have taken place about 3,600 years ago. The eruption probably led to the extinction of the Minoan people who lived here at the time, and it is believed that this event is the origin of the myth of Atlantis.

Today, Santorini is one of the most popular holiday destinations on the Greek islands. There are no more than 16,000 inhabitants living here, but the island welcomes nearly 2 million tourists each year. Tourism is also the main industry in Santorini,followed by winemaking and agriculture.

There are no more than 16,000 inhabitants living here, but the island welcomes nearly 2 million tourists each year. 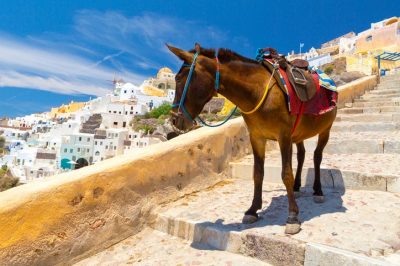 On Santorini you can test out a slightly unusual taxi – donkey-taxi.

There are several beautiful small towns in Santorini, where you will find good restaurants, nightclubs, cafes and bars, and where there is a certain shopping offer. The food traditions are typical greek and naturally focused on seafood. The ashy soil of Santorini means that several of the vegetables and fruits grown here are very tasty, and the island’s farmers are especially proud of their unique tomatoes.

The sights are largely focused on the island’s volcanic history. You will find ruins of the ancient civilization that existed on Santorini and many of the finest natural phenomena originate from the volcanic eruptions.

Although it can also be lively in Santorini, the island is most associated with romantic holidays, family holidays and is a place most people find tranquility. The island has been voted as one of the best resorts in Europe.

Having a rental car in Santorini is not a stupid idea. Although the island is quite small, it offers many popular places worth making their way around. However, public transport is not particularly good, and car is normally the best means of transport. Here is a small selection of sights that you might consider visiting on the beautiful volcano island.

Distances and driving time in Santorini

At its longest, Santorini is only about 17 kilometres long in line. The longest stretch you can drive takes only 40 minutes. The driving distance to and from the airport, or to places you want to visit when you are there, will therefore be short and comfortable, no matter where your hotel is located. 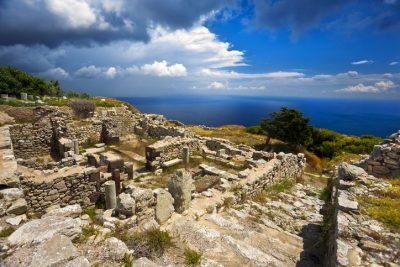 Thera has several ruins from, among other things, homes and temples.

Speaking of the ancient city of Thera, this revolves around ruins from homes, temples, markets and the like that were here when the Minoan civilization lived on the island. This was in the Bronze Age, and the entire settlement was destroyed in a volcanic eruption that occurred about 1600 years f.Kr. It is believed that Thera may have been the inspiration for the myth of Atlantis, the country that the Greek philosopher Plato wrote about. Guests can visit the excavations and visit the archaeological museum on the island to learn more about Santorini’s history. 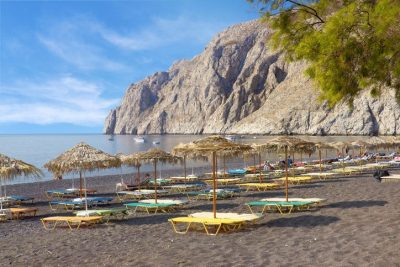 The sand is coloured dark because of the volcanic ash that spread in the region over 3,500 years ago.

This beach is the most popular on Santorini and is not too far from the airport and the ancient city of Thera. The sand is coloured dark due to the volcanic ash that spread in the region over 3,500 years ago and makes it soft and pleasant to settle here. Although there are usually a lot of people coming here, there’s plenty of room for everyone. There is also good cleaning at Kamari Beach, which gives the beach the marking blue flag. Kamari Beach is over 3.1 miles long, with sun loungers and activities everywhere. Within the beachfront, the traditional Greek houses are lined up. Most are dining options with private terraces located right on the beach. 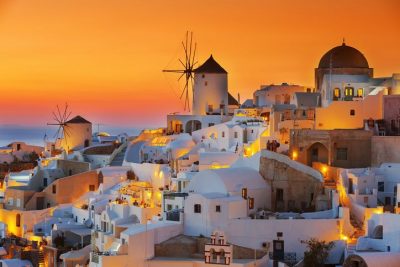 The sunset at Oia gives a magical atmosphere.

Oia – The best place to watch the sunset

The village of Oia is located at the northern end of Santorini, with settlements and views facing the volcano mountain and bay. Here, the traditional Greek houses are close to each other and cluster from the seafront up to the top of the rock. In between the houses there are narrow streets with small shops, restaurants, cafes and bars. At the top you will find some of santorini’s best restaurants and several dining options with a terrace. The view is the best on the island. Here people go to enjoy the pleasant atmosphere, and get a good meal while watching the beautiful sunset. You will find a couple of museums in Oia that are worth a visit, some beautiful churches, windmills and the ruins of a medieval fortress.

Red Beach on Santorini is completely unique on this edge of the globe. The red-colored cliffs are formed by lava and the red sand below are deposits from there. The colours of land provide a great contrast to the azure sea, making the place perhaps the most photographed on the island. It is possible to sunbathe and bathe here, but most visitors avoid this. The area is not completely safe, and there are times when a little mass is falling from the cliffs. Red Bech is mostly something you should experience for your visual impression when you’re on Santorini. There is parking right nearby and possible to stroll to the beach via a path that runs between the rocks. It is also popular to jump aboard one of the boats that depart from the villages nearby. Seeing the beach from the sea, especially in the sunset, is a memorable experience. 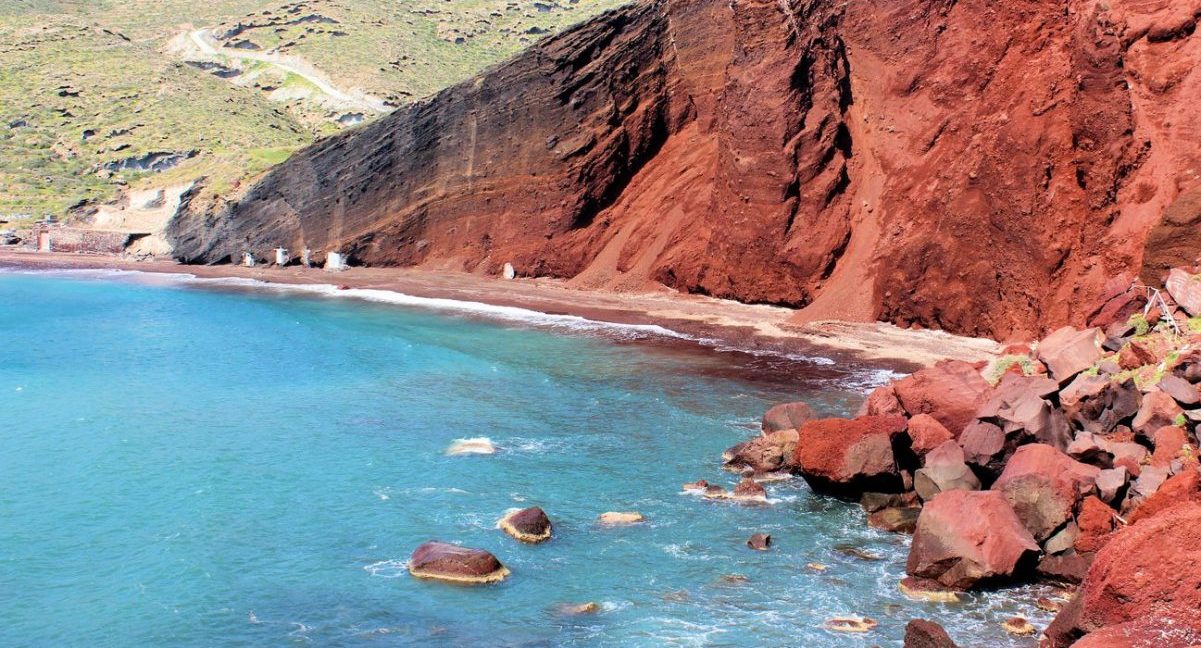 The sand is coloured dark because of the volcanic ash that spread in the region over 3,500 years ago. 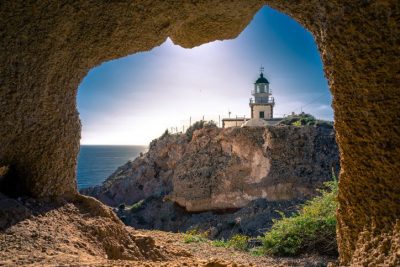 The tower has the same name as the fishing village, it is 10 meters high, and built in pretty white brick.

Akrotiri – The oldest lighthouse in Greece

On Santorini’s southern end is the small fishing village of Akrotiri. Driving further from there to the island’s southern tip, you will find one of the oldest lighthouses in Greece. The tower has the same name as the fishing village, it is 10 meters high, and built in pretty white brick. It was designed and built by a French company in 1892. The white brick building itself is a beautiful sight. Nevertheless, it is primarily the view that makes people waltz here when they visit Santorini. If you are romantically landscaped and enjoy watching the sunset, the lighthouse in Akrotiri is as good a choice as the comfortable terraces of Oia. Feel free to stop by the traditional restaurants located in the village of Akrotiri, and along the road to the lighthouse. Fresh seafood is traditionally served where fresh seafood is served. 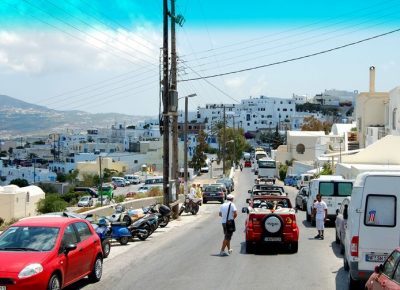 On Santorini it is mostly always free to park. It is also easy to find places to put away the car, perhaps with the exception of the cities of Fira and Oia. There you should not park in some of the main streets, but instead on marked spaces. Cars can be parked in most streets, but only as long as they do not block traffic. If you put the car too far into the road, you will risk being fined.

On Santorini, the vast majority of roads are narrow. As a result, buses and trucks in particular can be found to be quite in the middle of the road in some places. Although you are unlikely to have any problems, you should drive calmly and pay extra attention to oncoming traffic. Also, be careful if you are going to overtake other cars. Also drive carefully on the gravel roads, which you will find a good part of on Santorini. 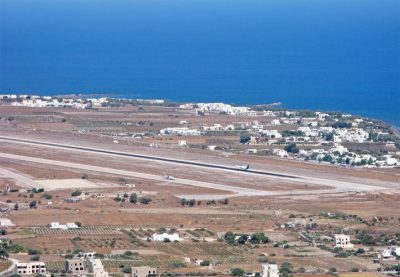 The airport of Santorini is officially called Santorini (Thira) International Airport. The name Thira comes from the fact that the ancient city of the same name is close by. The airport is not particularly large, although it is the most important for this part of the Greek islands. In total, it serves around 2.4 million passengers a year. Almost all traffic is seasonal, with a clear emphasis on charter flights. From 2020, Santorini Airport is among several in Greece that are determined to be expanded and upgraded.

Car hire companies are gathered in the terminal building, and the counters are easy to find. As of today you will find Sixt, Hertz, Thrifty, Avis and Budget represented here, as well as a couple of Greek landlords. The car park where your rental car is located is close by and you will not need transport there.