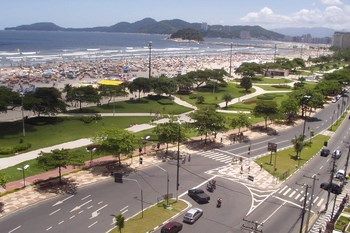 The port city of Santos is located southeast of Brazil’s Atlantic coast. The city is located in the state of Sao Paulo – partly on the island of Sao Vicente, partially on the mainland. The city has about 420,000 inhabitants, while the metropolitan area (whose name Baixada Santista) has a population of 1.7 million (2011).

Santos is located 80 km southeast of the biggest Brazilian metropolis of Sao Paulo (which has approx..’s 22 million inhabitants in the metropolitan area).

Santos, the country’s main export port and a versatile industry. The city is also an important commercial center and a popular tourist destination.

Santos is known for its beautiful sandy beaches, and has the world’s longest beach park of 7.3 km. The city is also famous for its city canal, its coffee museum and its football memorial in honor of its most famous players – including Pele.

Other tourist attractions include Santos Basilica de Santo Antonio do embar – originally from 1874, the City Hall from 1866, Santos Cathedral – built between 1909 to 1967 and Sea Museum “Museu do Mar” – which has the largest shell collection. Here you can see the giant shells of over 1 meter.

Another popular attraction in Santos, the mountain Monte Serrat. You can take the cable car or walk the stairs up to the top (157 m). From here you have a fantastic view of the region. At the top is also a chapel from the early 1600’s.

Santos otherwise have an aquarium with over 70 different species of fish as well as a beautiful botanical garden.