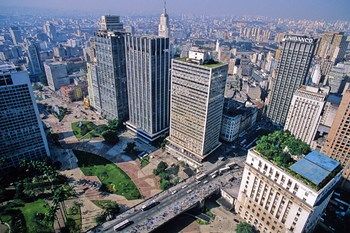 São Paulo is located in southeast Brazil – Ca. 80 km northwest of the Atlantic Ocean, is the country’s largest city with 11.2 million inhabitants (2010).Metropol area “Grande São Paulo” has the 19.8 million residents, and is thus one of the most populous metropolitan areas in the world.

São Paulo has countless tourist attractions, and one of them is the theatre “Teatro Municipal” from 1911 in neo-baroque style. Also art museum “Museu de Arte de São Paulo” (MASP) is worth a visit. The Museum has the largest art collection in South America. Another popular art museum located in the park “Parque do Ibirapuera.” The place has an impressive collection of both Western and Latin American art – including including works by Picasso and Modigliani. The park also has a planetarium, beautiful landscaped gardens, a Japanese pavilion, lake and a fountain.