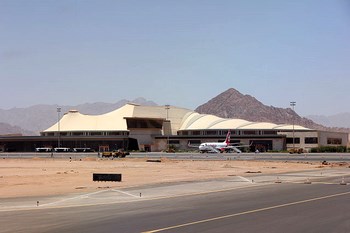 Sharm el-Sheikh Airport has regular scheduled flights to around 35 international destinations – most in Europe. The airport was opened in 1968 and currently has three terminals. Facilities available at the terminals include ATMs, cafes, restaurants, currency exchange, a newspaper kiosk, a jeweler and a souvenir shop.

From the airport into the city center there are several transport options. One can take taxi – or if you will, tourist taxi. The latter is more comfortable but also more expensive. One is, however, guaranteed English speaking driver. Another possibility is transport minibuses that is in route.

If you want to rent a car, there are many opportunities at the airport, since a number of the major international rental agencies have offices here hire (Avis, Hertz, Europcar, Sixt and others).