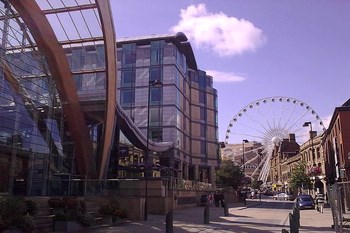 Sheffield is in South Yorkshire, and is the 4th largest city in England.The population is around 640   000 (2010) – while in the South Yorkshire region population of approximately 1.2 million. Don River runs through town, and it has this area been settlements here since Viking times.

The Sheffield is most famous for the production of steel. Already in the 1300s, the first steel mill established – and still produce steel here. Now there are special steel for knives and tools town in particular is associated with. Otherwise, there is a significant reproduction in Sheffield.

Sheffield’s premier architectural attraction is St. Peter and St. Paul’s Church from the 1100s. Otherwise, the city has a traditional theatre, which was established in 1897 (restored in 1990) and several museums.

The city is now a center for education, and there are two universities here, which has a total of 40 000 students: University of Sheffield and Sheffield Hallam University.

The world’s first football club – Sheffield FC – was born in Sheffield back in 1857. The two most famous clubs in the day Sheffield Wednesday and Sheffield United.