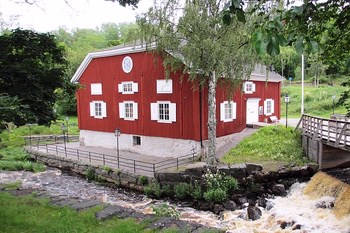 Söderhamn is a city and a municipality in Gavleborg eastern Sweden. It is located deep inside a fjord from Bothnian Sea called Söderhamnsfjärden. The town has 11,761 inhabitants (2010)

The city’s famous brand is Oscar Borg is a small castle with white tower built in 1895 on top of a hill near the city. The tower is built as a memorial to King Oscar II of Sweden, although the king in person never visited the city.

The city was founded in 1620 and grew up around guns factory Söderhamns gevärsfaktori which opened the same year and closed 200 years later.Today you can visit Borrhuset belonging factory and now converted into a museum. Another popular attraction for visitors is Söderhamn/F15 Flight Museum Air F 15 F with which has a good collection of older aircraft.

There are still some wooden buildings in the city, especially around the town center which is concentrated around the shopping street Köpmangatan and the ligneous Kungsgatan. Of the older wooden buildings can Eleonora Church from 1685 to 1692 and Söderhamns Hall, built 1860-69, is mentioned.

Archipelago with its 500 islands is another attraction that attracts visitors every year. Especially the romantic fishing village Skärså, popular.

Söderhamns Airport is a regional airport 4 km from the center of Söderhamn. The nearest major airport is Sundsvall Sundsvall Airport, 156 km outside Söderhamn.