Compare prices and find cheap car hire in Stockholm from well-known and local car hire companies. Insurances and unlimited mileage are included. Save up to 70% on car rental in Stockholm through us. 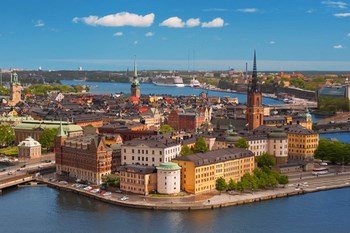 Stockholm is located on the east coast of Sweden by the Baltic Sea, and is Sweden’s capital and largest city – with a population of 870,000 (2011). If you count on the metropolitan area, the population rises to almost 2.1 million.

The capital is located in Stockholm county, and belongs to the landscape of Södermanland.

The city is Sweden’s cultural, economic and political centre, and is also a very popular tourist destination – with over 1 million visitors annually. Stockholm was named European Capital of Culture in 1998 and as Europe’s Environmental Capital in 2010.

The town is famous for its beautiful archipelago, with almost 30,000 islands, islets and reefs.

Stockholm has countless sights and tourist attractions, and some of the most visited are among others. The city centre of Gamla Stan with Stockholm’s 18th-century Castle, Storkyrkan – originally from the 13th century, the Reichstag House, Stockholm’s Stadshus – city hall from 1923 and stockholm medeltidsmuseum – a historical museum focusing on the Middle Ages. 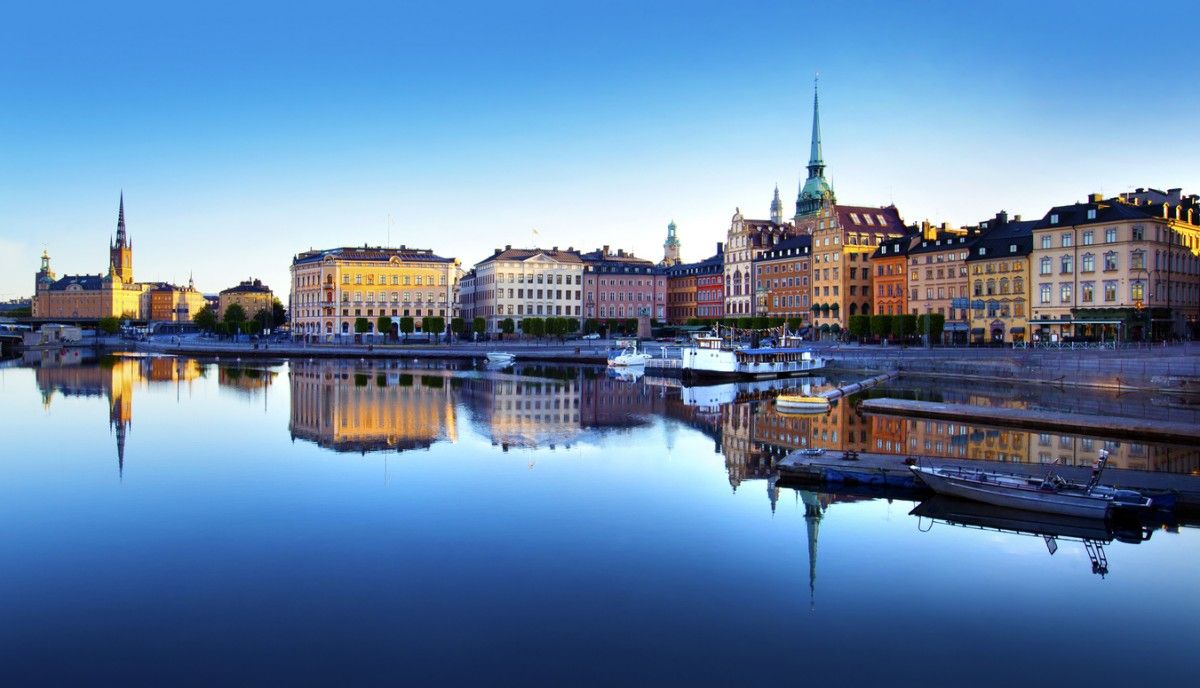 Other popular points of interest include Riddarholmskyrkan – original from the 14th century, The Natural History Museum, the sculpture park “Millesgården”, The Vasa Museum – with the restored ship Vasa from 1628, Skansen – an open-air museum and a zoo, the Moderna Museum – with exhibitions of Nordic and international contemporary art as well as National Museum – with art exhibitions, where you can also see works by Rembrandt, Renoir, Degas and Goya.

Stockholm is undoubtedly one of Scandinavia’s most beautiful major cities, where you will find lots of exciting sights and activities. The region around the capital is at least as exciting, and if you have time you should treat yourself to some excursions while in the city. There are several small towns near Stockholm that are worth a visit, not to mention all the great places along the archipelago. Here are some suggestions for excursions that are easy to complete by car rental. 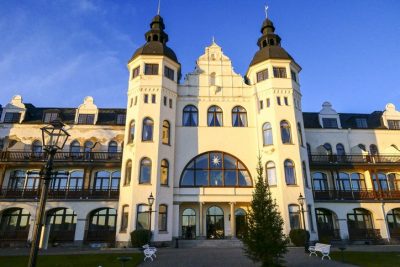 When it is hot in Stockholm it is good to know that the Swedish capital is surrounded by many magnificent islets, islands and smust seaside resorts. Saltsjöbaden is one of the very best places to enjoy summer, and the city is just a short drive from Stockholm. Originally, Saltsjöbaden was a place where rich people went to the sanatorium, in addition to many of them having their exclusive summer homes here. The city is today a lively and pleasant place in summer, with many cultural events,activities for young and old, and a number of great beaches to settle on. You’ll find all sorts of accommodations in Saltsjöbaden, from theunsurious and venerable Grand Hotel,to affordable summer cottages. The restaurants and cafés offer traditional Swedish dishes, and several are very good at seafood. 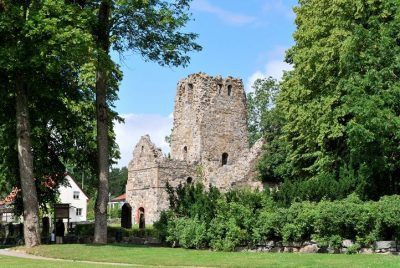 The medieval town of Sigtuna is Sweden’s oldest city.

The small medieval town of Sigtuna really has too few inhabitants to invoke city status. Nevertheless, it is considered one of the most historically important cities in Sweden. Sigtuna was the country’s center for administration, trade and religion for nearly 300 years. Here, Sweden’s first coins were made, the city house Swedish archbishops, Sweden’s first Christian king was crowned in Sigtuna, and it is believed that several Swedish kings ruled from here during periods. Today Sigtuna attracts many visiting tourists, and especially those interested in history and beautiful small towns. Besides the beautiful settlement of the intimate streets, Sigtuna boasts of having the largest collection of runestones inthe world. Also stop by the impressive Skokloster Castle, located a few kilometres north of the city. The castle was home to the Swedish general at a time when the country was one of Europe’s most powerful states. It was built in the mid-17th century and is exceptionally well preserved.

The Swedish royal family mostly lives at Drottningholm Castle just outside Stockholm’s city centre. The castle was built in the 17th centuryand is the best preserved of its kind in the country. Today, the castle is one of Sweden’s main sights, and most of it is open to the public. Only one wing is privately used by the royal family. If you join a tour of the castle you will see halls from different eras, a gallery with unique sculptures by the artist Adriaen de Vries, the studio of the Swedish painter Evert Lundquist, beautiful gardens,an accompanying chapel, and the castle’s own theatre building. In the latter, both plays and opera are set up, usually in connection with the summer festival held in the castle park.

Drottningholm Castle has guided tours and a beautiful garden to walk in. 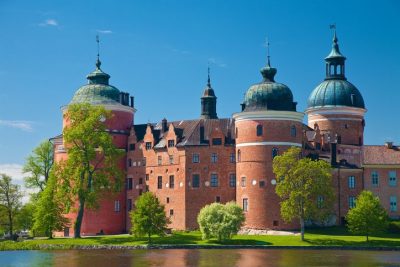 Gripsholmens Slott was first built in the 14th century as a fortress.

The small town of Mariefred has only a few thousand inhabitants, but is considered one of Sweden’s most important towns in historical context. The town is idyllically located by one of Lake Mälaren’s fjord arms,with a marina and a maritime feel. The settlement consists mostly of small and beautiful wooden houses, interspersed with several historic buildings from the Middle Ages. The most central of these is Gripsholmens Slott. The castle was first built in the 14th century as a fortress, and has been expanded and rebuilt a number of times since then. Visiting Mariefred is like going back in time. In addition to visiting Gripsholmen’s castle and the castle’s beautiful gardens, you can, among other things, take a trip on the lake with the steamship S/S Mariefred,travel in the surrounding area with an old steam-powered train,visit several interesting museums, and stroll the royal deer park. 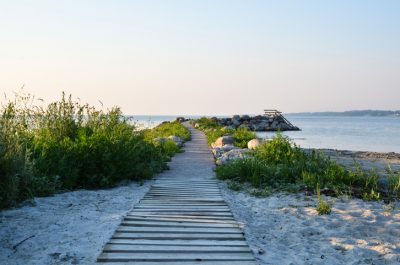 Öland is the second largest island in Sweden, only bypassed by Gotland. It is located almost entirely to the mainland, with bridge connection open all year round. The bridge runs from the historically famous town of Kalmar, which is also worth a trip by. On Öland, the Swedish royal family has its summer house, many Swedes travel here to holiday in the summer. In addition to having excellent swimming opportunities on beautiful beaches,Öland is famous for its archaeological excavations and historic buildings. There are several ruins of ancient fortresses and so-called village castles (fortified settlements from the Iron Age and Bronze Age) on the island, and also more intact and modern citizen, including Borgholm Castle. You’ll also find more modern architecture that’s impressive, such as the Swedish royal family’s summer residence on Öland. This is the island to drive to if you are interested in art, nature and a comfortable holiday life. 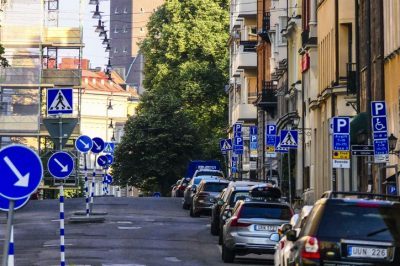 Parking along the streets is not so easy to find in Stockholm.

Finding a parking space on the street in the center of Stockholm is not always as easy, and definitely not in Gamla Stan. The fees are also quite high. In the residential areas close to the city center, such as Södermalm, it is more affordable, but here there is great competition for the parking spaces. If you find space to park on a marked area on a street, you will have to pay a fee on a vending machine that is on the sidewalks. The machines accept coins, bank cards and credit cards. The receipt must be clearly visible in the car’s windshield.

The best option is, as a rule, to make use of the many Park-and-Ride facilities. These are publicly run parking spaces located in close proximity to public transport into the city centre. The prices here are significantly lower than what you have to pay in the parking garages inside the city center itself. The lowest price is if you arrive at the parking lot between 05:00 and 09:00. Please note that there is a separate fee for driving in the city centre during the day during everyday hours.

Technically, it is easier to drive in the centre of Stockholm than in most other European cities. Traffic is relatively low, and drivers mostly polite and friendly. As a visitor, you are unlikely to be stressed when driving a rental car on the streets of Stockholm. Swedish drivers rarely break traffic rules, they usually keep the speed limit, and they stop for pedestrians.

Driving outside Stockholm and other major cities in Sweden is even easier and more comfortable. The roads are consistently good, traffic quite comfortable, and this is one of the safest countries in Europe to drive in. 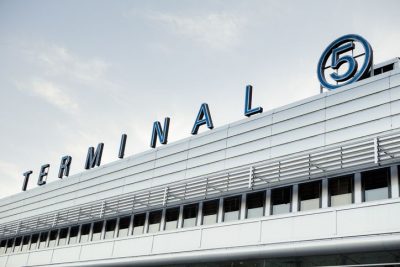 All international flights use terminals 2 and 5.

Stockholm Arlanda Airport is located north of the centre of Sweden’s capital, and is the third largest airport in the Nordic region. About 27 million passengers use Arlanda per year. The majority of these travel on international flights to European cities, but there are also direct flights to, among others, the United States,Asia and the Middle East that go to and from Stockholm. The airport has four terminals, numbered from 2 to 5. Domestic flights use terminals 3 and 4, while all international flights use terminals 2 and 5. However, all terminals are connected.

All car rental companies are assembled into a separate center at the airport parking facility called P2 Beta (long-term parking). It is quite possible to walk there, but you can also make use of the bus that runs from the exit to all terminals. The bus is clearly marked with “P2 Beta”, and runs continuously. As of today, Hertz, National, Sixt, Alamo, Europcar, Budget, Enterprise and Avis offer car hire at Stockholm airport.