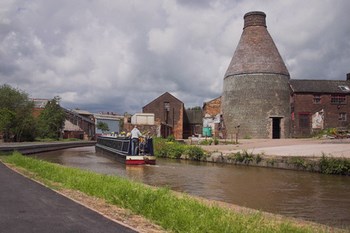 Stoke-on-Trent (Stoke just called in the vernacular) is located in the western part of Middle England, in the county of Staffordshire. River Trent runs through the city. In 1910 Stoke merged with several smaller neighbouring towns (Hanley, Burslem, Longton, Tunstall and Fenton). The total population is currently around 240,000 (2010).

It has developed some functions between the six original towns. Burslem and Fenton include known for its educational institutions, while Hanley is a trading center.

Since the 1600’s, Stoke been known for its pottery and its porcelain production. Some of the most popular tourist attractions are related to this part of the city’s history – including several museums. Potteries Museum & Art Gallery in Hanley, while Gladstone Pottery Museum in Longton. In one of the suburbs Stokes (Etruria) there are two points of interest in relation to one another, Etruria Industrial Museum and the almost 30 km long Caldon Canal, which was built back in 1779.

It must also be mentioned that there are still potteries in Stoke-on-Trent, and several of these have factory outlets, which is well visited by tourists.