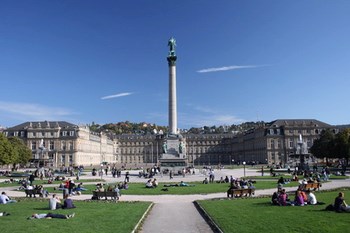 Stuttgart is located in southwest Germany and the capital of the state of Baden-Württemberg.The city is beautifully situated in a side valley to Neckartal. Stuttgart has an important function as south-German industrial and commercial center, as well as a regional communications hub.

Stuttgart has about 600,000 inhabitants (2010), and is a major utdanningsby – including two universities, art academies and a college of music and theater arts.

Stuttgart was founded ca. 1250 – and was for several centuries city of residence of the Counts and Dukes of Württemberg – and from 1806 until German unification in the 1860s, the city was the capital of the Kingdom of Württemberg.

Also Stuttgart was – like most other big cities in Germany – strongly battered during the 2 World War. Some historic buildings escaped damage – including Stiftskirche from 1321 and the Altes Schloss from the 1500s. The latter is now home to an archeological and historical museum.

Several magnificent castle near Stuttgart is preserved. This includes the Schloss Rosenstein, where today there is a natural science museum and Neues Schloss.

In the center there are several modern buildings, which stand out – first and foremost Neues Rathaus from the 1950’s and Carl-Zeiss-Planetarium in the 1970s.

Stuttgart otherwise has a number of museums and cultural institutions to showcase. Foremost among these is the huge State Theatre and the Concert Hall Liederhalle.

Also the zoological-botanical garden Wilhelmina, is a major tourist attraction in Stuttgart. This is the largest of its kind in Europe – including 9,000 different animals, aquarium with crocodile hall and a huge collection of orchids.

Otherwise, the Bad Cannstatt – with all their spas – well worth a visit.