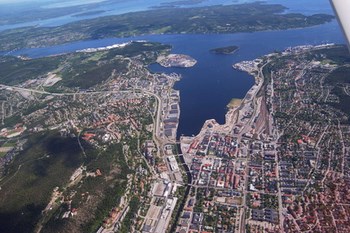 Sundsvall is a Swedish by the Västernorrlands located at Gulf of Bothnia in the middle of the country.Sundsvall is the administrative center of Sundsvall municipality and has a population of 50,712 inhabitants (2010).

According to one historian, so started the industrialization of Sweden in Sundsvall in 1849 when it was purchased a steam engine to Tunadal sawmill. The first large Swedish strike was the “Sundsvall strike” in 1879. The forest industry is still very important for the city. It is in Sundsvall E14 against Norway has its origin.

Much of the city was destroyed in a fire in 1888. When it was rebuilt it was legal that one would use brick and not wood. The center calls itself “Stone Town”.

Every year in July there is a large, commercial music festival in the city called Gatufesten. In the fall there will be a greater heavy metal festival called the Nord Fest. Sundsvall is also home to the unique festival Musikschlaget, a radio singing contest for groups around Sweden with disabilities.Other festivals the city is known for kite festival and Selånger Market.

Sweden’s first international casino with offices at the old railway station was opened in 2001 in Sundsvall.