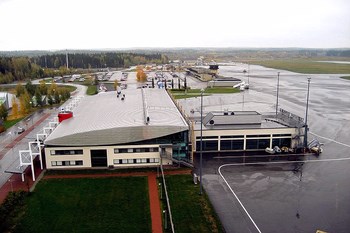 There are buses with frequent service between the airport and the railway station in Tampere. Alternative means of travel is taxi. If you want to rent a car, there are several possibilities. Many of the major international car rental companies have offices at the airport. This includes the Avis, Europcar, Budget, Hertz and Sixt.

There are a few shops and a restaurant in the airport area. Otherwise, there are conference rooms with office facilities in the terminal building, there is also a VIP lounge. The closest hotel is the Spa Hotel Rantasipi Eden, located in Nokia – 7 km northwest of Tampere Airport.