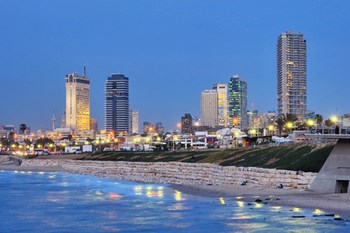 Tel Aviv is Israel’s second largest city, located on the west coast of the Mediterranean Sea. The city has about 390,000 inhabitants, while the metropolitan area (including neighboring Jaffa) has a population of 3.2 million (2010).

The city is often regarded as the capital of Israel, and Tel Aviv is the country’s main commercial, financial, – and cultural center. In addition, the city has an important port, several universities and many foreign embassies are based here. Most political parties’ headquarters is also located in Tel Aviv.

The city has a number of tourist attractions – including opera houses, theaters, museums and galleries. The big art gallery “Tel Aviv Museum of Art”, a visit and the History Museum with its archaeological collection – “Eretz Israel Museum.” Other major museums include Ben Gurion Museum, Batey Haosef Musem (Military History) and a Jewish museum. In addition there are several smaller museums with exhibits of glass, diamonds, coins and pottery.

The modern Tel Aviv has a number of shopping centers with elegant boutiques. The city is also known for its inviting beach with great beach promenade.

From the top of “Shalom Tower” or “Azrieli Tower” (tallest building in Israel date. Currently), visitors get a spectacular view of Tel Aviv.