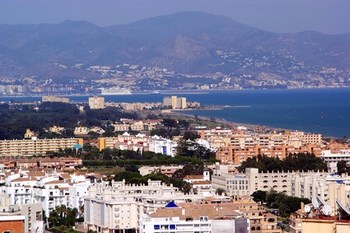 Torremolinos is located in southern Spain – In the Spanish province of Malaga in Andalusia.The town is located 14 km southwest of Malaga city – specifically on the popular Costa del Sol (Sun Coast). Torremolinos has about 68,000 inhabitants (2011), but the holiday season is this number multiplied – when tourists flock to this popular seaside town.

There have been several exciting archaeological finds in the area, showing that there was a large settlement here as early as 150,000 years ago. From ancient times, and through parts of the Middle Ages, the region was dominated in turn by Phoenicians, Romans and Arabs. The Arabs built such the 12 meter high tower defense – Torre de los Molinos – which gives the town its name.

Torremolinos was a poor fishing village until tourists was developed as a main occupation in the area in the 1950s. It was the first of the resorts on the Costa del Sol which was developed and quickly reached great popularity, particularly among British tourists.

The most famous attraction is the over 2 km long beach “Playa de Torremolinos.” Otherwise, there is the more popular destinations slightly off center – towards Malaga. First and foremost, it goes for the exotic crocodile park (with over 300 crocodiles in the “all” sizes), Aqualand – Costa del Sol’s largest water park and the Botanical Garden “Jardin Botanico Molino de Inca”.

Torremolinos is also known for its lively nightlife, with bars, restaurants and night clubs.