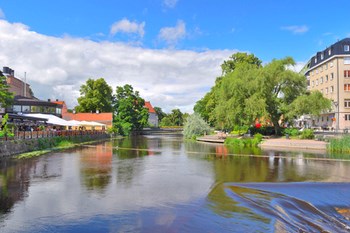 The university town of Uppsala is located in eastern Sweden and the administrative center of Uppsala County.The city lies on the River in the province of Uppland Fyrisån.

Uppsala has 140,000 inhabitants (2011), and thus Sweden 4 largest city. The city is both an important commercial center and a significant gateway.

The university was founded in 1477 and is the oldest. The main building is from 1887, and in the extant university building “Gustavianum” from 1622, is today a university history.

A major landmark in the city of Uppsala cathedral, with its distinctive two towers. It originated in the late 1200’s and is considered one of Europe’s largest cathedrals.

Other tourist attractions in Uppsala include City Hall from 1713, Linnéträdgården (with Linnaeus Museum) – originally constructed as a botanical garden in the 1600s, Evolution museum – such as has Scandinavia’s largest collection of dinosaurs and Uppsala Castle from the 1500s – which is located on a hill overlooking the city.   Inside the castle, visitors can get art and architectural history tour.

North of Uppsala is “Gamla Uppsala” – with grave mounds from the Viking Age.

The city hosts a number of annual festivals and events – including a popular reggae festival, which is the largest.