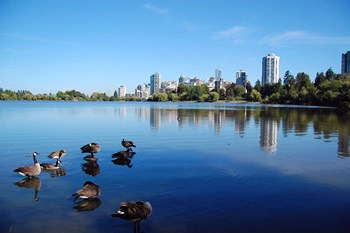 Vancouver is located in southwestern Canada the Pacific coast, and belongs to the province of British Columbia.The city is located in a hilly terrain on the Burrard Peninsula by the bay Burrard Inlet, and is surrounded by sea and mountains.

Vancouver has 612,000 inhabitants, while the metropolitan area has a population of around 2.2 million (2007). Vancouver hosted the Winter Olympics in 2010 and has since been growing tourism. Vancouver is a multicultural city with many ethnic and different religions. Approximately 30% of the population are Chinese, and many tourists find their way to the city’s “China Town”. Climatic Vancouver is known for being a rainy city, except for the period from June to September. In summer the sandy beaches of the city very popular.

A popular tourist attraction in the city is 177 meters high tower “Harbour Centre Tower” located on the harbour. The tower has observation decks – “Vancouver Lookout” – where visitors 360-degree panoramic views of the city and mountains.

Other attractions in Vancouver include art gallery “Vancouver Art Gallery” – with over 8,000 works of art, the 98 meter high skyscraper “Navy Building” from 1930 in the Art Deco style, and Stanley Park with its aquarium.