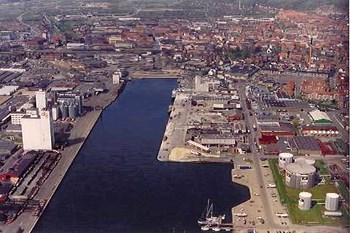 The Danish port city of Vejle is located on the southeast coast of Jutland – the head of Vejle Fjord – and belongs to Region of Southern Denmark. Vejle is the regional capital and largest city with 51,300 inhabitants (2011).

Vejle is the cultural and economic center of the municipality, and is also a modern commercial city – where there is good shopping – in both small specialty shops and major department stores.

The city’s most popular tourist attractions include Sankt Nicolai Church – where the oldest parts are from the 1200s, Vejle Town Hall in neo-Gothic style from 1879, Vejle Windmill – one of the city vartegn from 1847 and listed on a hill overlooking the “Himmelpind”, Vejle City Museum, Vejle Kunstmuseum – with art collection including contains works of the famous painter Rembrandt and experience center “Ecolarium” – focusing on the ecology and recycling.

Approx. 30 km west of Vejle is “Lego Land”, which is one of Denmark ‘s most popular tourist attractions.In the town of Jelling – 13 km northwest of Vejle – are the two famous runesteiene “Jellingesteinene” from 1000’s – which is a UNESCO World Heritage Site. Jelling also has several monuments from the Viking Age and the exhibition center.