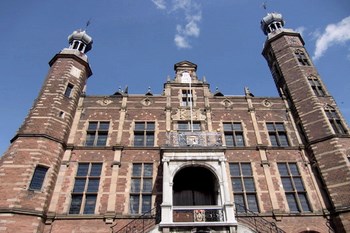 Venlo is located southeast of the Netherlands by the river Maas – approx. 60 km east of the city of Eindhoven.Venlo belongs to the province of Limburg, and the municipality has approximately 100,000 inhabitants (2011).

The town is located near the border with Germany, and is a commercial and industrial center and an important transport hub. In 2003 the city was voted “Europe’s most green city”.

East of the old town, the Museum District. Here is example the popular art museum “Van Bommel van Dam” – with exhibitions of paintings, sculptures, drawings and photographs. Also the historical museum “Limburg Museum” is located here, and visitors can see the extensive archaeological exhibits including artifacts from the Neolithic age.

There is good shopping in Venlo with small specialty shops and major department stores. The city hosts several annual festivals – including “Zomerparkfeest” in August – with live music, dance and art exhibitions. The festival lasts for 4 days.