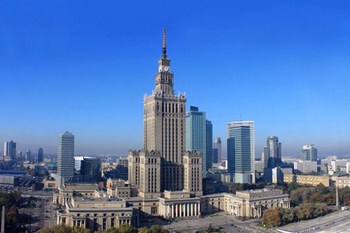 A brand new airport was completed in 2008, 40 km north of Warsaw – and it serves as relief Airport for the main airport, especially when it comes to charter traffic. It will eventually be able to handle 2.3 million passengers.

A number of airlines, as well as Polish international, operates a large number of regular flights to destinations throughout Europe.

There is no train from the airport to the center of Warsaw, but the bus service is good – and you could also take a taxi. If you want to rent a car in Warsaw, several international car rental companies at the airport its affiliates – including Avis, Budget, Europcar, Hertz and National.

Warsaw Airport has a useful range of shops, restaurants and bars. There are also two internet cafes in the airport. In addition, there are conference rooms, information counter, banks, ATMs, money exchange offices, post office and medical center.

Near the airport, there are two smaller hotels – Falcon Transit Hotel and Courtyard by Marriott. Otherwise, the selection of hotels large and varied in and around the Warsaw.