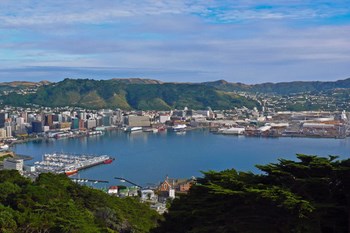 Wellington is the capital of New Zealand, located on the Cook Strait on the Southwestern tip of the North Island.The city has 180,000 inhabitants (2011), but it is estimated suburbs – rising population of around 386,000. This is so New Zealand’s largest urban area.

Wellington was founded in 1840 and became the capital in 1865. The city is the country’s political center, and is an important commercial, industrial and cultural center. In addition, Wellington significant transportation hub with major port and an international airport. It has a university, founded in 1899.

Wellington has a number of museums, art galleries, theaters, opera and concert venues, and the city is known for its film and theater industry. In addition, Wellington famous for its beautiful natural harbor.

Some popular tourist attractions in Wellington include National Museum – with its cultural history, the War Museum, the Maritime Museum, “Museum of Wellington City & Sea,” Parliament “Bee Hive” from 1981, St. Pauls Cathedral from 1866 and a zoo.

On a hill west of the city center is a beautiful botanical garden, and there are cable car up here.

The mountain “Mount Victoria” (196 m) is also a popular tourist attraction, and from the top you get amazing 360-degree panoramic views of the city and harbour.