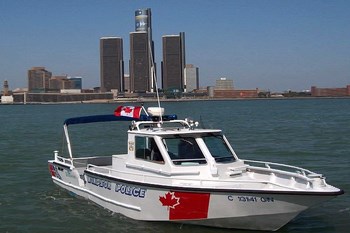 Windsor is in Ontario at the Detroit River opposite Detroit. The city has a population of 210,891 inhabitants (2011).

Windsor has been nicknamed the “City of Roses” and the residents called Windsorites. The city is known for its many parks and gardens located along the waterfront.

Windsor has a significant production of motor vehicles, industrial machinery, iron and steel products, pharmaceuticals and food processing. It also has a university and is an important student.

Every summer Windsor co-hosts the two-week-long Windsor-Detroit International Freedom Festival, which involves a giant fireworks display. Fireworks are one of the biggest is a tribute to the U.S. and Canadian national days and held last Monday in June over the Detroit River. The event attracts over a million spectators on both sides of the river bank.

Many of Detroit’s residents travel to Windsor where they can do things that are forbidden in Detroit and the United States, such as buying Cuban cigars and rooms. You come also many same-sex couples to devote himself because it is banned in the United States.

The nearest airport is 10 km away and Windsor international airport.