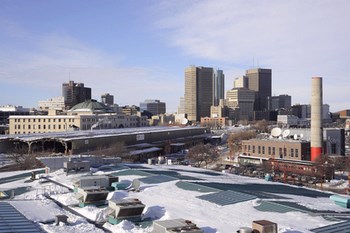 Winnipeg is the capital and largest city in the province of Manitoba in Canada with a population of 730,018 inhabitants (2011).It is located at the confluence of the Red River and Assiniboine meet in the middle of Canada.

The first European who arrived here was Sieur de La Verendrye, a French officer who came to the area in 1738.  But Winnipeg area was already an important trade center for indigenous peoples before the Europeans came. Today the city is one of Canada’s most important commercial, financial and industrial center.

Winnipeg has a very well developed art and culture with its own Symphony Orchestra and the Royal Winnipeg Ballet is Canada’s oldest ballet company. Winnipeg is known for his many film and advertising production companies and a large independent film community. Winnipeg’s three largest performing arts venues are the Centennial Concert Hall, Manitoba Theatre Centre (MTC) and the Pantages Playhouse.

The city is known for its many festivals. One of them is Folklorama is the largest and oldest multi-cultural festival in the world. Winnipeg Fringe Theatre Festival is the second-largest alternative theatre festival in North America as The Winnipeg International Writers Festival brings writers from all over the world to Winnipeg for workshops and readings.