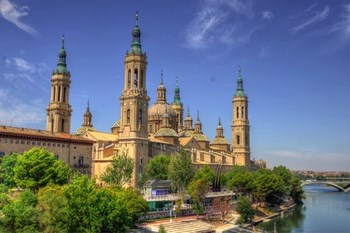 Zaragoza is located in northeast Spain, and is the capital of the region of Aragon.The city is situated on the river Ebro in Zaragoza Province – 300 km north of Madrid.Zaragoza has 675,000 inhabitants (2011), and is Spain’s 5th largest city.

Zaragoza is an important commercial and industrial city, and is also a major transport hub. The city has its own university – which was founded in 1474.

A famous landmark in the city is the Church “Basilica del Pilar” from 1600’s – the largest baroque building in the country and one of the most important places of pilgrimage in the Catholic world. Inside the church one can also see several interesting works of art – including frescoes by Goya.

The city is otherwise a museum dedicated to the sculptor Pablo Serrano – with exhibits of sculptures, drawings and graphics.

In addition aquarium messe-/konferansesenter and a historical museum.