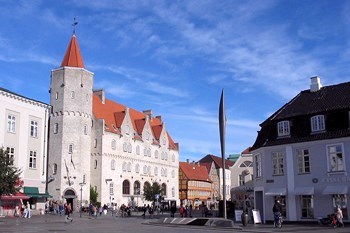 Aalborg is the administrative center of Region North Jutland, and has approx. 124,000 inhabitants (2011). The city lies on the southern bank of the Limfjord – but today also includes Nørresundby on the north shore.

Aalborg was granted city status in 1342, but had already been a trading center for about 300 years.

There are more reminiscent of the Middle Ages in Aalborg – including burial mounds from the Iron Age and Viking at Lindholm Høje, north of the Limfjord. Otherwise, there are some historical sites in downtown Aalborg. Most famous is Aalborghus Slot from the 1500s, Budolfi Church (Aalborg Cathedral (built in the 1400s, but with some parts from the 1100s) and a monetary from the 1400s.

Among the other attractions are must-timbered house Jens Olufsen Gaard from the 1600s and the impressive Jens Bangs Stone house (built in 1624) is mentioned. The well-preserved 1700s Hjelmerstald environment is also well worth a visit.

Of the newer tourist attractions in Aalborg is Karolinelund Tivoliland and Aalborg Zoo popular destinations. So is the 55 meter high tower Aalborg. Arts and culture enthusiasts should definitely check out the North Jutland Art Museum and the Utzon Center (culture, art and design).

Aalborg one of Jutland’s most active nightlife cities, and the Virgin Ane Gade is famous for its many restaurants and bars.

Aalborg Airport is located on the north side of the Limfjord, about 6 miles northwest of downtown.