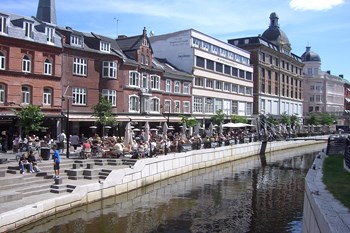 Aarhus (Århus) is Jyllands’s and Denmark’s second largest city. It is located at Aarhus Bay on the east coast of Kattegat Region Mid-Jutland. The city has 252,213 inhabitants, while the municipality has a population of approximately 320,000 (2012).

Aarhus is Jutland’s largest commercial and the region’s economic, educational and cultural center. Among the most important educational institutions are the University of Aarhus, Aarhus University Hospital and Aarhus Research Park.

Also technology and industry are important for businesses in Aarhus, and the city has one of Jutland’s busiest ports.

The old city center is situated at the mouth of Aarhus Z. Here is where traces of fortifications from the Viking era, and part of the medieval, winding street network and several peat is preserved.

An historic and architectural landmark in the city is Aarhus Cathedral (“Sankt Clemens”) from the end of the 1100s, located at Store Torv. Medium Peat and Lille Torv find Borg Gate – a former city gate from 1250’s. Also the city’s oldest church, St. Nicholas from 1000’s, is a major tourist attraction in Aarhus. This is also the oldest stone church in Scandinavia. Otherwise, St. Olaf’s Church from the beginning of the 1100s are mentioned, and the two monasteries – listed respectively in the 1200s and 1400s.

Other popular tourist attraction in Aarhus is Marselisborg Slot (listed in perioden1898-1902), Mindeparken – with its beautiful gardens and historical elements, Ole Romer Observatory from 1911 Forstbotanisk Have and Marselisborg Woods – Pet Haven and Tivoli Friheden.

Aarhus is also known as an exciting culture – with key contemporary institutions ARoS Aarhus Kunstmuseum, Aarhus, music and Scandinavian Center. In this context, besides “Aarhus Festuge” mentioned – the largest cultural festival with contributions from local, national and international artists. It has been held every year in the transition from September to August since 1965.