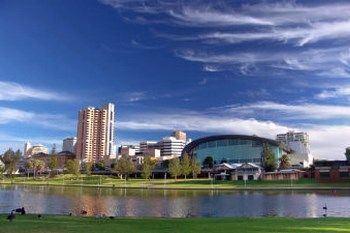 The city of Adelaide is on the southern coast of Australia, and is the capital of the state of “South Australia”.Adelaide has 1.3 million inhabitants (2010), and is thus one of the 5 biggest cities in Australia.

The state has a Mediterranean climate with mild winters and hot, dry summers. Most precipitation falls between June – August.

Adelaide is a cosmopolitan city with modern architecture, and is also known to be a “Green City” because of its numerous parks around the city. There are also zoological and botanical gardens that are popular destinations for tourists. In addition, there are good swimming conditions in Adelaide with several sandy beaches in the vicinity. The city has more than 700 restaurants, cafes and pubs and a number of museums and art galleries. Adelaide is also known for its annual festivals of film, art and music.

A major tourist attraction in the city is Tandanya – a center for Aboriginal arts, crafts, theater, music and dance.