Compare prices and find cheap car hire in Ålesund from well-known and local car hire companies. Insurances and unlimited mileage are included. Save up to 70% on car rental in Ålesund through us. 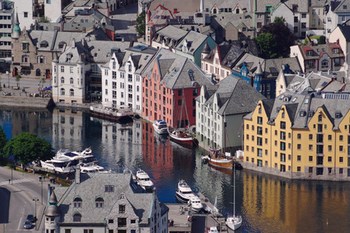 Ålesund is located on the west coast of Møre og Romsdal county, and has 44,000 inhabitants (2012). The town is located in the sunnmøre landscape, and is Norway’s 11th largest city. largest city.

Ålesund is a major trade and cultural centre for the region, and also has an important export port – where the export goods are primarily fish and fish products. The ship route “Hurtigruten” (which runs between Bergen – Kirkenes) arrives at the port of Ålesund daily, and in the summer you can take hurtigruten from Ålesund to Geiranger.

The town spans several islands, and the city centre is located on Aspøya and Nærvøya. Ålesund was hit by a city fire in 1909, and large parts of the city centre were completely damaged. Today, the city is known for its Art Nouveau archicle tour with towers, spires and ornaments.

Ålesund is known for its Art Nouveau architecture. 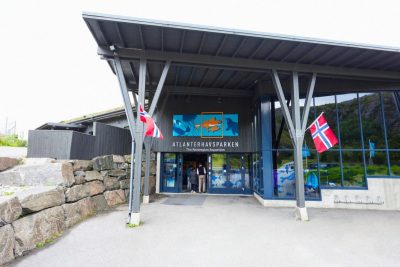 Some popular tourist attractions in Ålesund include: Ålesund Church from 1909, Ålesund Museum – with its cultural history exhibitions in the field of hunting, fishing and shipping, the Medieval Museum with its archaeological excavations, the Fisheries Museum, Sunnmøre Museum – a open-air museum/folk museum with exhibitions of houses and boats, Borgund Church – with its core from the Middle Ages as well as the art museum KUBE.

3 km west of the city center is the Atlantic Park, which is Ålesund’s Aquarium Facility. This is one of northern Europe’s largest saltwater aquariums, where visitors can learn more about wildlife in the Atlantic Ocean.

In addition to being one of Norway’s most beautiful cities, Ålesund has a lot to offer for those who want to go on excursions by car rental. Nature is the big drawcard. Those who have time should catch up with both the islands that lie outside the city, and the impressive mountains and fjords that dominate the entire region. Below you will find some suggestions for excursions. The first, a drive to Trollstigen, takes you along the lion’s share of the stretch called the Atlantic Road, supposedly the most beautiful road in the world.

Trollstigen – one of Norway’s most famous sights

Trollstigen is a stretch of county road 63 that meanders up the mountain, and is part of the mountain pass that connects Åndalsnes with the village of Valldal. The stretch of road is considered one of the country’s most famous tourist attractions and sights. The highest point is 850 meters above sea level, where you will find a great built-up vantage point with a spectacular panorama. There you will also find a café, souvenir shop,toilets, and opportunities for a walk along the mountain slope, with bridge over Stigfossen. Please note that Trollstigen is closed for winter and only open from about the end of May to early October. 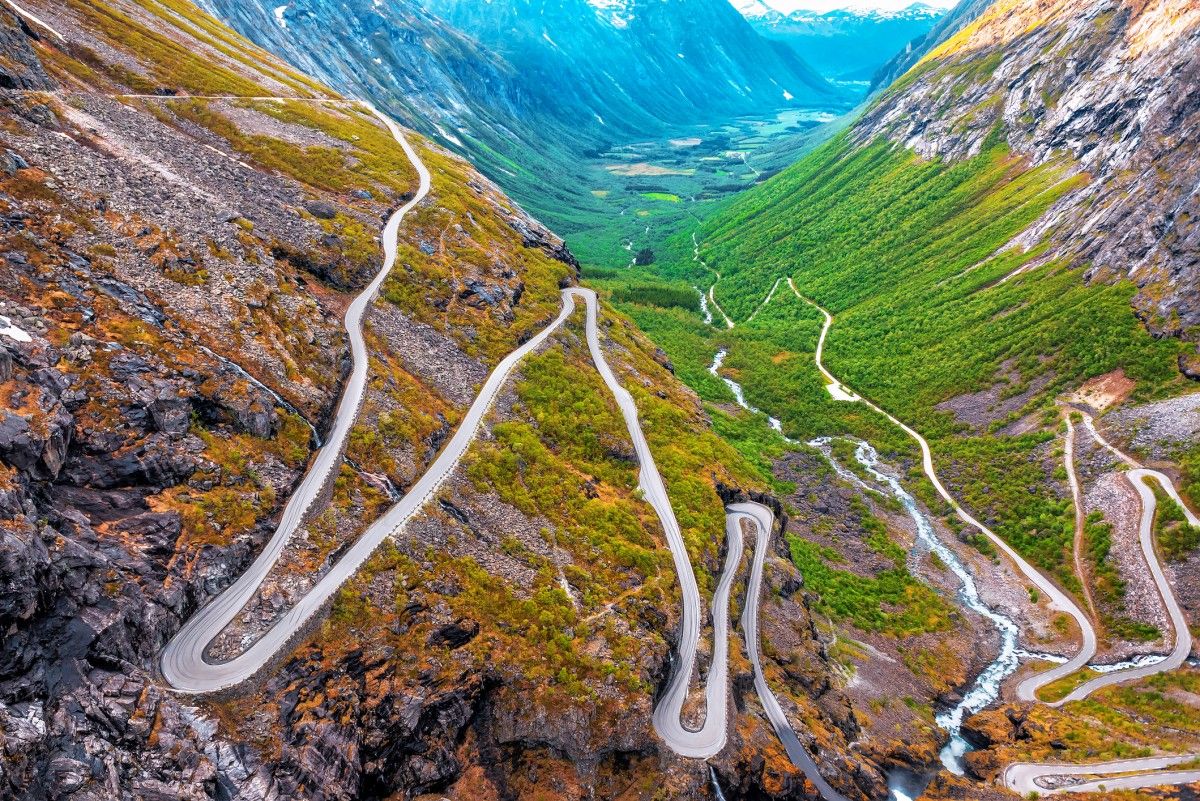 Spectral Trollstigen with its sharp turns up the mountain. 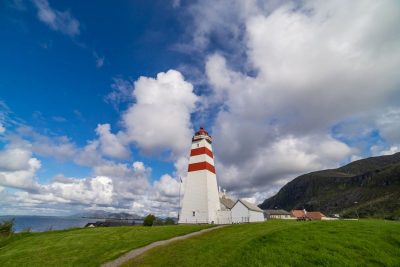 Alnes lighthouse is located on Godøy outside Ålesund.

This beautiful lighthouse is located on Godøy outside Ålesund. It is possible to drive all the way through the underwater tunnels leading to Ellingsøya and Valderøya, and on to the bridge to Godøya. Alnes Lighthouse was built in 1869, then with a crane lamp up in the tower, and his own lighthouse master with family who lived there all year round. It has been rebuilt several times, and the version you see today is from 1937. In addition to exploring the beautiful fishing village of Alnes,you get the opportunity to get up to the lighthouse and enjoy the view of the sea from there. The café belonging to the lighthouse house is famous for its homemade cakes and also has a historical exhibition to offer. 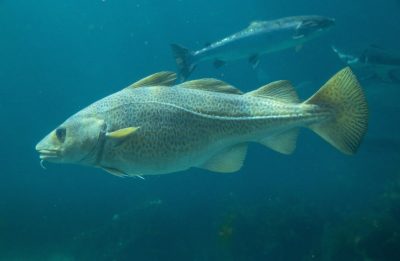 The Atlantic Park has a unique aquarium with fish and sea creatures that live along the Norwegian coast.

Atlantic Park – Just outside the centre of Ålesund

Atlanterhavsparken is Norway’s first science centre for everything to do with the sea. Here you can experience and learn about all the species that live in our own waters. The centre has a unique aquarium with fish and sea creatures living along the Norwegian coast, and Europe’s largest outdoor pool where rock copper (a seal species) swims. These can be seen up close, including from the associated underwater observatory. The Atlantic Park also has a children’s water play park– a small park with otters, a penguin park, a café, and several activities that engage people of all ages.

This vantage point boasts of being Europe’s highest which is accessible by road. The platform is 1500 meters above sea level, with a drop right down to over 500 meters. It was opened to the public in 2016, and offers a fantastic view down to Geiranger town centre and the bottom of the fjord. In addition, you get great views of the mountains that surround the fjord, including Blåbreen. This whole area is a UNESCO World Heritage Site. You can drive all the way to Geiranger Skywalk and park there if you want, or choose to put the car to the parking lot below. Then you get a great walk of about 350 meters. The tour goes on a safe and built-up path that runs along the rock face, giving you an even better impression of the magnificent surroundings. Please note that the road to Dalsnibba is closed in winterand open from about mid-May to early October. 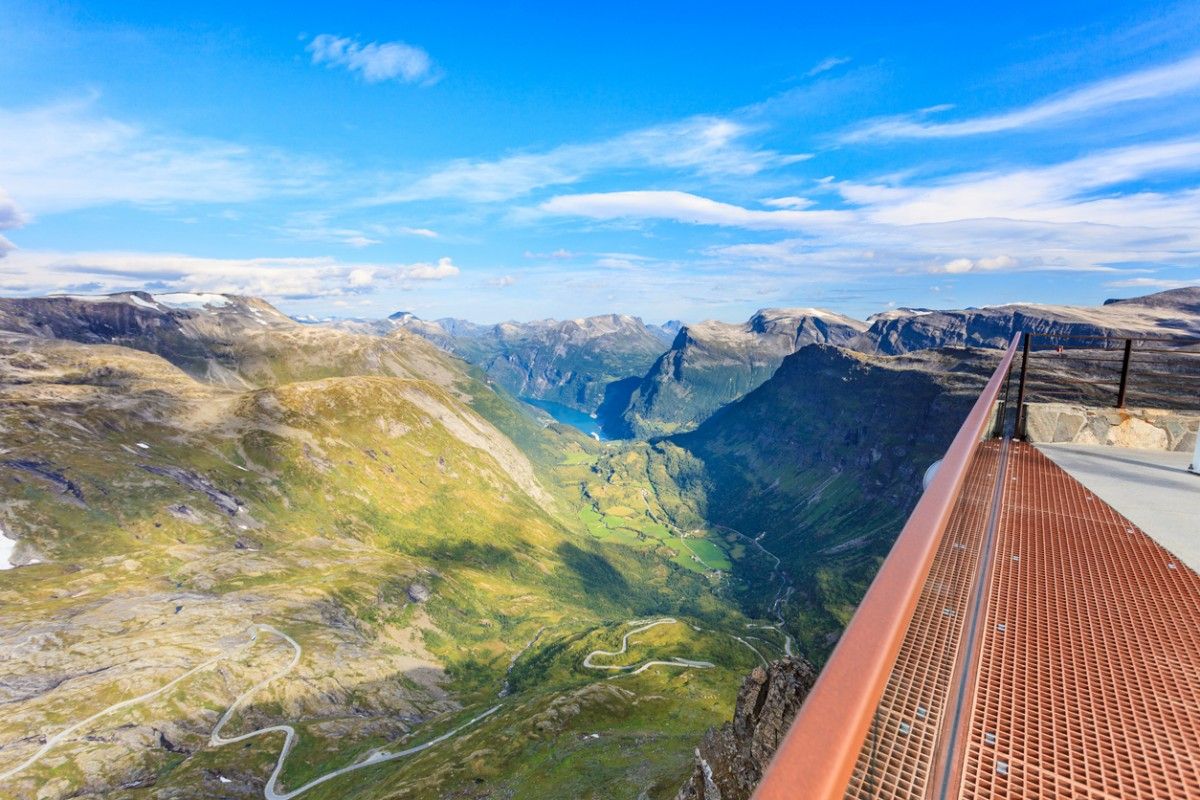 A fantastic view of the valley and the fjord from Geiranger Skywalk. 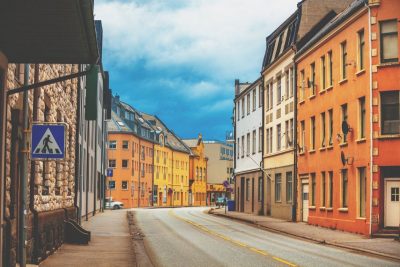 It is easy to get by car in the center of Ålesund.

In Ålesund you can park in most streets,with a fee between 08:00 and 16:00 on all weekdays, as well as Saturdays. Outside these times, parking in marked municipal parking spaces is free of charge. Please note that single parking spaces are earmarked for short-term parking,in which case the rental car can stand there for a maximum of two hours. Most hotels have their own parking spaces for their guests, but some of these require a fee. In addition, there are four parking garages in the city centre.

The traffic in Ålesund city centre is like most other Norwegian small towns. It’s easy to get there, and rarely queue or cork. Please note that the county and national roads in the region may have some traffic in the summer.

Those arriving in Ålesund by air land on the island of Vigra. As of 2020, the car hire companies Sixt, Budget, Avis, Europcar and Hertz are represented at Ålesund Airport Vigra. Their offices are unified and easy to find. The car you rent is parked right outside the terminal building.