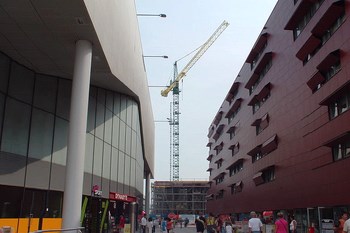 Almere is one of the newest cities in the Netherlands, and the first house was built here in 1976.The city is known for its unique architecture with many very modern buildings. Tourists often visit Casler in Almere, which is a center devoted to architecture and design. Place regularly hosts cultural events, film screenings and exhibitions.

Another popular tourist attraction in the city is “The Museum Pavilijoens” – a museum with exhibits of contemporary art. The theater in Almere is also worth a visit, which was designed by Japanese architects.

There is also great shopping in Almere, with both stores and the mall. Many of the shops in the town have since 2006 been open on Sundays.

Slightly off center lies Almere Strand (“Almeerderstrand”) by IJ lake (IJsselmeer). The area is a popular summer swimming and water sports, and many festivals and events held at this beach.