Compare prices and find cheap car hire in Amsterdam from well-known and local car hire companies. Insurances and unlimited mileage are included. Save up to 70% on car rental in Amsterdam through us. 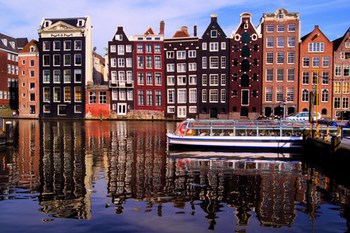 Amsterdam is the capital and largest city in the Netherlands, and is located southwest of Lake IJ (IJsselmeer) in the province of Noord-Holland. The city has connections to the North Sea via the North Sea Channel. Amsterdam itself has 780,000 inhabitants, while the metropolitan area has a population of approx. 2 million (2011).

The capital is an important city of culture and has a number of tourist attractions. Amsterdam is perhaps best known for its city centre with many canals and bridges, the brothel quarter “Red Light District” as well as the many coffee shops with its liberal cannabis policy.

Some of the city’s most visited attractions include: The Rijksmuseum – where you can see exhibitions of several masterpieces in Dutch painting, the Royal Palace at dam square from the 17th century, the Children’s Art Museum, the Van Gogh Museum – dedicated to the famous artist as well as the Stedeljik Museum – an international centre for modern art – with works by, among other things. Picasso, Chagall and Matisse.

In addition, the museum “Anne Franks Hus” is a popular attraction in Amsterdam. Here, the Jewish family hid during world war two. World War II, and Anne Frank wrote the world-famous diary in this house. 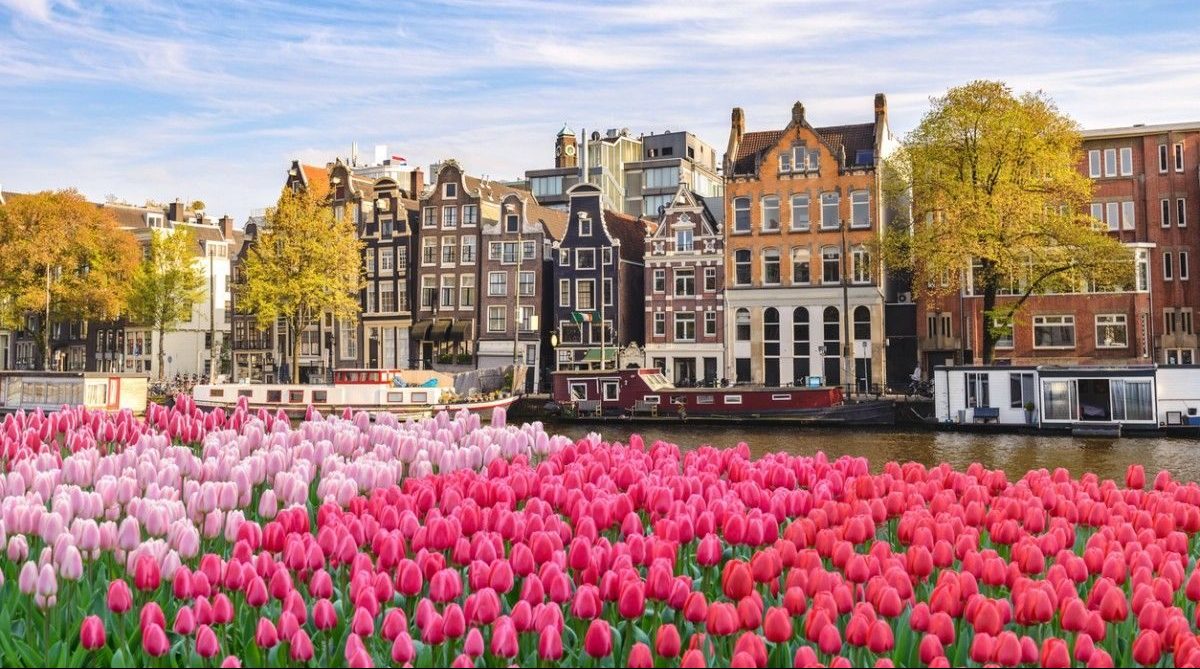 The canal in Amsterdam with the famous tulips in the foreground.

Holland is not a big country, and from Amsterdam you don’t have to drive far to catch up with many exciting sights and cities. There is also a pretty well developed road network in Holland, with highway connecting all major cities. Here are a number of suggestions for easy-to-implement driving. Several of them can be combined just fine when you have a rental car.

Just southwest of Amsterdam lies the North Sea,with some of Europe’s finest and longest sandy beaches. You have many nice small towns to choose from whether you want to swim, sunbathe, or just enjoy the sea air. One of the finest places is Noordwijk aan Zee, where the rather famous Hotel Grand Hotel Huis ter Duin is located. In Noordwijk you will find nice small restaurants and cafés, good swimming opportunities, as well as promenades and pavilions that are nice to walk along. In the summer months there are teeming and exciting people’s lives there. 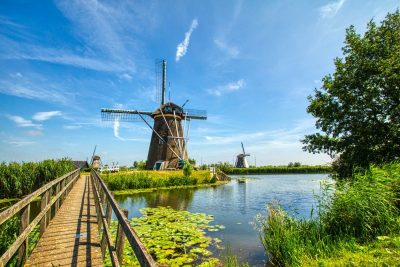 Traditional windmill from 1740 in the Netherlands.

In Kinderdijk you can see and experience what most people might associate most with Holland, namely windmills, and canals. There are 19 mills dating to about the year 1750, and are currently a UNESCO World Heritage Site. The moths were used to pump the water away from the fields, and into the artificial dikes and ducts that surround the cultivated area. Most of the 19 windmills are inhabited, and in some of them you get a tour. You can also visit the visitor centre to the complex to learn more about the beautiful buildings. 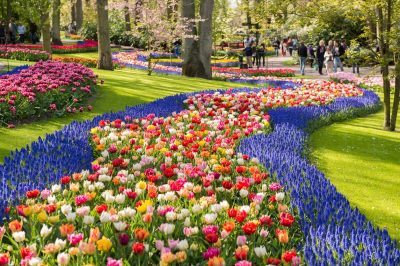 Keukenhof is one of the world’s largest flower gardens and must really be experienced!

Keukenhof – One of the world’s most beautiful gardens

The Dutch are still one of the world’s leading exporters of tulips, and the flower species has a central part of the country’s modern history. The best, and perhaps most beautiful place to experience this, is in Keukenhof. This is one of the world’s largest flower gardens. You can see over 7 million tulips in all different colors, an experience that is especially great in spring when the tulips bloom. The garden complex is one of Holland’s main sights, attracting almost 1.5 million visitors each summer. Please note that the park is only open for about 8 weeks a year, from approximately mid-March to mid-May.

The Hague is known in part because here lies the International Court of Justice. That the city is Holland’s administrative capital there are fewer who know (Amsterdam is the official capital). In The Hague you will find, among other things, Holland’s Supreme Court, the cabinet, all the embassies, and here also has the Queen’s primary residence, Paleis Huis ten Bosch. The city was founded as early as 1248, it has a lot of beautiful and old buildings, many exciting sights, and a good selection of restaurants, cafes, shopping opportunities, and much more.

The Hague is the administrative capital of the Netherlands. 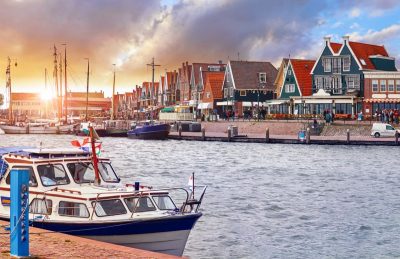 In the fishing village of Volendam, you should visit one of the many fish restaurants.

The great lake located northeast of Amsterdam is IJsselmeer. along the sea there are a number of traditional fishing villages,where Volendam is one of the most famous. This is also located relatively close to Amsterdam, making it easy to visit the village. Volendam is a good place to experience the authenticity of Holland. The village pier and harbour are very beautiful and well preserved, and surrounded by small, cozy and pretty houses in traditional style. You will find many good fish restaurants in Volendam, several exciting museums, there are often concerts here, and plenty more to experience. 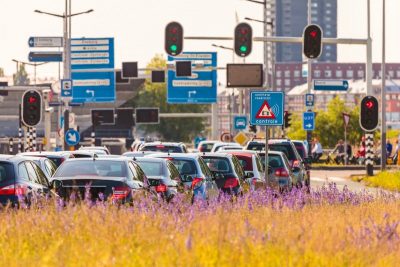 It is not particularly difficult or cumbersome to drive in the center of Amsterdam, but most choose to leave the car parked in the hotel. Use the rental car for excursions, and instead take the tram or legs grab in the city centre. It usually goes faster. If you are driving in thecity centre, please note that the tram always has a right of drive , even if you were to come from the right.

Currently, work is being done to make Amsterdam virtually car-free. Therefore, finding parking in the streets can be a bit challenging, and this is sure to get worse eventually. The parking spaces still exist, but the fee may be somewhat high. Use the parking garages that you will find many of, or the hotel’s parking if they have.

You land at Luchthaven Amsterdam Schiphol when flying to the Dutch capital. Schiphol is a major airport and is considered Europe’s third most trafficked (number 11 worldwide). As a rule, it is a short distance from the car rental company’s counter to the place where the car is parked.

At Schiphol you will find all the major car hire companies operating in Europe, including Alamo, Budget, Avis, Sixt and Europcar. In addition, you will find the offices of lesser-known companies, and some local Dutch actors, such as Goldcar and Green Motion.