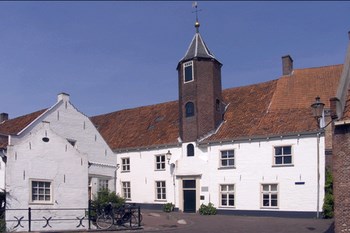 Amersfoort is situated by the river Eem in the province of Utrecht and has 147,000 inhabitants (2011). The city is located in central Netherlands – about 50 miles southeast of Amsterdam.

Amersfoort is an important railway hub and a popular service and tourist town.

Amersfoort is famous for its well-preserved historic center which is surrounded by a city wall from the 1300s.Buildings and streets are medieval. In the old city’s the most popular tourist attractions  are the Church of Sint-Joris from 1534, the port “Koppelport” from 1425 and brick (“Muurhuisen”).

In addition, you can visit Our Lady tower from 1444 – which is one of the highest church towers in the Netherlands. The tower is 98 meters high and has earned the nickname “Long John”.

The medieval city has many canals and over 400 national monuments. Amersfoort has a number of museums – including the City History Museum, art museum and culinary museum – dedicated to the art of cooking.

The city hosts a number of annual festivals – including an art festival and a jazz festival.