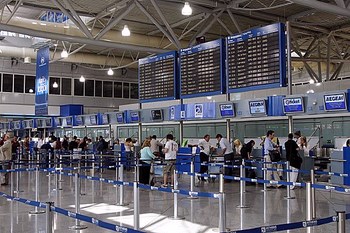 Athens International Airport – Elefhérios Venizélos (ATH) is located approximately 30 miles east of Athens city center, and is among the 30 busiest airports in Europe.

The airport is known as one of the finest and most modern – in terms of both architecture and interior design. The airport serves 16.2 million passengers per year (2009), and the airlines Aegean Airlines and Olympic Air are based here.

From Athens Airport goes direct to the home and abroad, including to the Greek islands, to most major cities in Europe as well as to cities like Tel Aviv, Dubai, Beijing and Singapore.

The airport was opened in 2001 and has two terminals. Amenities for travelers include banking, ATMs, post office, business center, internet access, children’s playroom, open days Medical, Office, pharmacies as well as short and long term. There are also a number of shops and kiosks in the terminal building, the airport has 16 cafes / restaurants / bars. Nearest hotels – Sofitel Athens Airport Hotel – located directly opposite the terminal building.

From the airport you can take bus, subway, commuter train or taxi to get to the center of Athens. In addition, car rental companies Avis, Budget, Hertz, National and Sixt offices at Athens Airport, if you want to rent a car.