Compare prices and find cheap car hire in Athens from well-known and local car hire companies. Insurances and unlimited mileage are included. Save up to 70% on car rental in Athens through us. 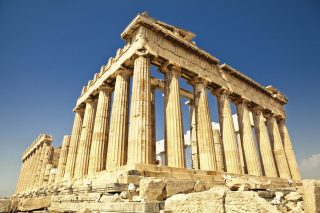 Athens is the capital of Greece and is one of the world’s oldest cities, it was founded about 2000 years f.Kr. The metropolis has just over 3 000 000 inhabitants and is home to a third of the country’s population. The city is the administrative centre of the country and here you will find both the parliament building and the presidential residence. The origins of both democracy and science spring from Athens.

The city is famous for its rich history and the many archaeological memories. At a height of 156 meters above the city, the Acropolis is and the area is visible from several areas of the city. Several of the ancient monuments were at risk of weathering due to pollution and large parts of the city centre are now car-free as a measure to bring down pollution.

The world’s first Olympic Games in modern times, took place at the Panathenic Stadium. The Temple of Zeus and Hadrian’s Bow are also well worth catching up with. Several museums can be found in the city, including the Acropolis Museum and the National Archaeological Museum.

High above the capital Athens, the Acropolis is throned.

Athens is an exciting city in most ways. It is often associated with archaeology and history, and is perhaps among the best when it comes to sights. At the same time, the city is modern, with a vibrant and hectic cityscape. Nevertheless, many believe that the best experiences in Greece are the ones you will find outside the capital. Here are some suggestions for excursions that are easy to reach by car rental. 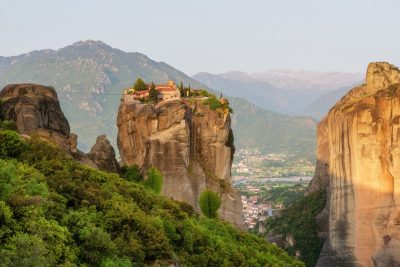 The monasteries are built on precipitous pillars of the sandstone.

Just off the town of Kalambaka, north of Athens, you will find some of the most special monk monasteries on the planet. Originally there were 24 of them, but today only 6 remain. All monasteries are built on top of precipitous pillars consisting of sandstone. The monasteries have been built and renovated several times, and it is believed that the origin is from small churches that were built on the peaks sometime around the 12th century. You can visit all six of them, but be prepared for a somewhat dizzying experience when you’re going up the stairs on your way up to the peaks. Meteora is considered to be one of the most beautiful landscapes in Greece, and is simply reached from Athens by car rental or train. 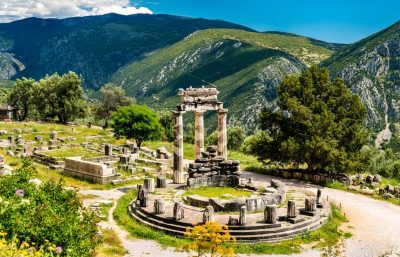 The ancient Greeks regarded Delphi as the center of the world. Here they went to communicate with the gods.

Delphi is the name of both a small town and an archaeological site located nearby. The ancient Greeks regarded the place as the center of the world,and went here to communicate with the gods. They did so in the famous temple dedicated to the god Apollo. It is in this temple that the well-known oracle of Delphi (Pythia, a priestess who was supposedly able to communicate with Apollo) was housed. This is one of Greece’s most important sights, and well visited by tourists. In addition to a lot of interesting archaeology and museums,you get to visit a nice little village that claws its way up the mountainside. 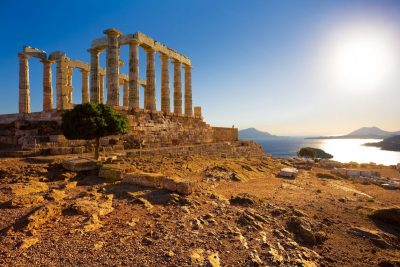 The ruins of temples in honor of the sea god Poseidon and the goddess Aene.

Cape Sunion is the promontory located at the end of the Peninsula of Attica, just south of Athens. The place is described in the epic poem Odyssey of Homer, and has a central position in Greek history. Here you will find, among other things, the ruins of temples in honor of the sea god Poseidon and the goddess Athens, the remains of the fortress from the war between Sparta and the Athenians, a great beach with hotels, restaurants, cafes and shops, and opportunities for excellent meals with fresh seafood. There are also several pleasant fishing villages near Cape Sunion that may be worth a visit.

The peninsula located just west of Athens is called the Peloponnese, and is believed to have been one of the first places in Europe to develop civilization. Here are the historic city states of Sparta, Mycenae and Corinth, the village of Olympia where the original Olympic Games were held, and many small and cozy fishing villages that are excellent places to visit. The beaches of this part of Greece are undoubtedly among the finest, and usually there is a seaside resort adjacent, where you will find good hotels to take in. At the Peloponnese you get a combination of culture, history, nature experiences and great beaches, and you haven’t seen Greece until you’ve visited the peninsula.

On the peninsula is the village of Olympia where the original Olympic Games were held. 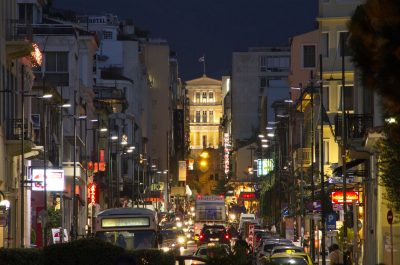 It can be stressful to drive in the center of Athens. During rush hour, there is often heavy traffic and long queues, which contribute to more impatient drivers.

Finding parking spaces along the streets of Athens city centre can be challenging, and parking garages are usually a better option if you have to use your rental car where you need to. It is recommended to leave the car, for example, at the hotel and instead use the legs and public transport.

Driving inside Athens can also be quite stressful. During rush hour, there is often heavy traffic and long queues, which contributes to even more impatient drivers.

On the outskirts of Athens, and elsewhere in Greece, it is far easier and more comfortable to travel around in car rental. The road network is consistently good, and road quality is good especially on the motorways. Nevertheless, you should pay more attention than you might be accustomed to. The Greeks tend to drive fast and aggressively, and are not always as concerned with the speed limits. With a calm and slightly defensive driving style, you will hardly get any problems. 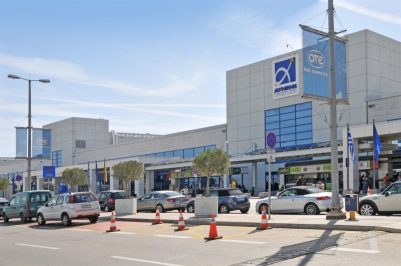 The main airport in Athens is called Eleftherios Venizelos. It was built to serve Athens and the Attica region, and was completed so that it could also take care of traffic in connection with the Athens Olympics in 2004.

As of 2020, you will find five car hire companies with offices at the airport outside Athens. These are Avis, Budget, Sixt, Hertz and Enterprise. All companies’ offices and counters are located in the arrivals hall of the main terminal.