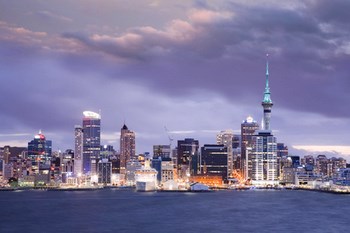 Auckland is New Zealand’s largest city and is located on the North Island in the Pacific. The city has 1.5 million inhabitants in the metropolitan area (2010), and is a leader in industry and culture. The city is also an important commercial center and an important crossroads – with two ports and an international airport.

Auckland lies 37 degrees south of the equator in a volcanic area. The region has a temperate climate with warm summers and wet, mild winters. The city is surrounded by water, and is often called the “City of Sails” because of the many sailing boats at the harbor.

Auckland was founded in 1840, and the city has the largest concentration of indigenous Maori in New Zealand.

The cityscape is dominated by skyscrapers, and Sky Tower is a major tourist attraction. The tower is 328 meters high, and visitors can get up to several observation decks where you get a panoramic view. There is also a restaurant in the Sky Tower.

Auckland hare several museums, theater, opera and concert stages. Some popular attractions are among others the art gallery “Auckland Art Gallery”, a maritime museum, a technical museum, a zoo and the modern havakvariet “Kelly Tarton’s Underwater World” – where visitors including can observe sharks.

There is also great shopping in Auckland, with both stores, markets and shopping centers. In addition, the city has a vibrant nightlife with restaurants, pubs and night clubs.

There are many popular sandy beaches on the Waitemata Harbour, and on the west coast has great surfing opportunities.