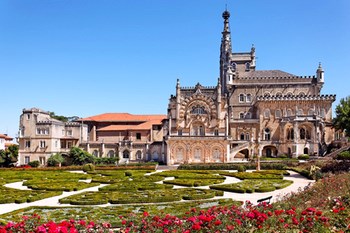 Aveiro is a coastal town located at the mouth of the Rio Vouga, ca. 60 km south of Porto. The town has nearly 80,000 inhabitants (2010), and is the second largest city in the so-called Centro region and one of Portugal’s main fishing ports.Also salt production has for many years played a significant role in Aveiros industry.

Its history dates back to the 900s, when it was known by the Latin name Alavarium. It was, however, a serious blow to such a catastrophic storm in the year 1575, when the harbor and most of the buildings were completely destroyed. Aveiro however, came back on its feet when it gained a central position as the entry port for the lucrative, Portuguese Newfoundland fishery.

Aveiro’s premier attraction is the many canals, which made the city often called “Portuguese Venice “.Ships are also popular – especially amongst the tourists visiting the city. Otherwise, there is much point architecture in the city – including several beautiful churches.

Other attractions in the immediate vicinity Aveiros lures tourists. This includes the beaches along the peninsula Sao Jacinto, in the Barra area and the Costa Nova do Prado. In addition, the traditional, exclusive porcelain factory Ílhavo Ceramica de Vista Alegre is a popular tourist destination. It is located in a village about 9 miles south of Aveiro downtown.