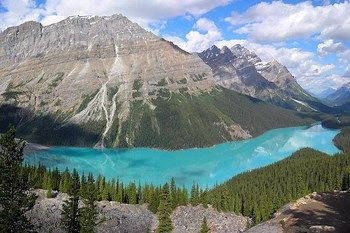 Banff is located 130 km west of Calgary in the Banff National Park in Alberta. Banff is the ideal location for those who enjoy mountain.   The village has 7,584 inhabitants (2011) and urbanization is very controlled and limited to Banff is in a national park.

Banff is one of Canada’s most visited tourist destination because of the mountains, the Canadian Rocky Mountains, and has a wide range of outdoor activities in summer and winter. The growth of the city in recent years has led to concerns among some environmentalists who fear it will damage the park.

For being such a small place, there are many hotels, restaurants and a bustling nightlife in high season. It is a short distance to Lake Louise and Kanaskis County, making Banff extra attractive. One should not miss the fascinating fairy chimneys called Hoodoos in Banff National Park.

The most popular mountains nearby Mount Rundle (2949 m), Cascade Mountain (2,998 m) and Mount Norquay (2134 m) which is known for its great skiing and mountain biking opportunities. One can take the gondola to the top of Sulphur Mountain (2281) which is a good base to visit many of the hot springs.

The nearest airport is Calgary International Airport, which is around 150 km away.