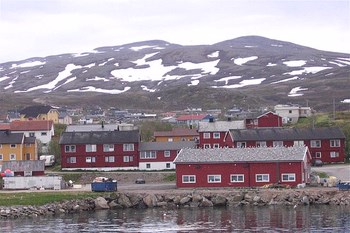 Båtsfjord is a municipality and a municipal center in eastern Finnmark located on the north side of the Varanger Peninsula. It is one of Norway’s most northern communities. Båtsfjord have 2122 (2012) inhabitants, as well as all the inhabitants live in the center.

There are several abandoned fishing village in the municipality today mainly used for tourism, one of them is Makkaur 15km outside. However, due to the proximity of the Barents Sea is the main industry is still fishing and fish processing, and Båtsfjord is one of the largest fishing villages. There are several fish processing factories in the municipality, and especially Båtsfjord known for its production of capelin. On the plateau run the reindeer.

The landscape of the municipality consists mostly of mountains and plains, situated 400 m. and goes steeply down to the sea. Landscape Båtsfjord is very old because it was formed even before the Ice Age. There are several settlements and the capture of the Stone Age.

Among the attractions are bird Stauran mountains on the north side of the bay. It is one of Norway largest nesting, here you can experience sea eagles and a variety of nesting seabirds.Vesterelva expiring in Sylte Fjord is a good river for those who like to fish for salmon. This year’s festival is called Båtsfjord the party and held last week in July, with concerts and events. Hurtigruten port in Bisho.