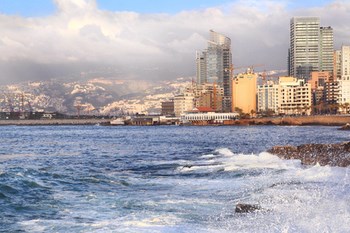 Beirut, capital of Lebanon, and also one of the most important ports in the eastern Mediterranean. The city has about 1.8 mill. inhabitants (2010). Much of Beirut is located on a peninsula jutting into the Mediterranean.

Beirut is an old city, which is mentioned already 1400 years BC Kr. – And in Roman times it had great importance as a trading center. Since the Middle Ages the city’s history, however, (at times) been very turbulent. Also in the latter part of the 1900s, Beirut has experienced turbulent times, including in 1975-76 (the Lebanese Civil War) and in 1982-85 (conflict with Israel).

The political conflicts and war has had a negative impact on the economy – and also caused some damage in the city. After the war ended in 1989, the government worked hard to make Beirut a center for knowledge, culture, tourism and fashion. In 2006 the city was bombed by Israel, as the occupying parts of Lebanon to fight against Hezbollah – and as a result, there are still a few large refugee camps in the city.

Beirut is a divided city, where East Beirut is dominated by a Christian population, while West Beirut is mainly Muslim. The boundary between the two districts is called the “green line”.

The city has several notable museums, including The National Museum of Beirut (which is Lebanon’s main archaeological museum) and The Archaeological Museum of The American University of Beirut (the third oldest museum in the Middle East). Otherwise, one of Lebanon’s most popular destinations around. 88 km east of the capital: The impressive Roman temple ruins at Baalbek city in Bekaadalen.

Otherwise Beirut has invested a lot of literature, and in 2009 UNESCO capital of books.

The nearest airport is the Beirut Rafic Hariri International Airport, located 9 km south of the city.